Last night I was watching clips of a couple of Jezebel writers, Tracie Egan (brunette, teetering towards a certain fullness of face) and Moe Tkacik (redhead, thinner), on Lizz Winstead‘s Shoot the Messenger, a weekly talk show. Their appearance was taped on 6.30.08. If you haven’t spoken to any sharp, urban twentysomething femme fatales lately, you may want to watch this.

Mostly I was going, “Okay…” Sassy but not classy, and certainly not very curious about anything outside their realm. Is there anything more attractive than the exhibiting of genuine curiosity? Is there a bigger turn-off than people who don’t seem to know the meaning of the word? Although I admire their sexual fearlessness, or the pose of same.
Egan and Tkacik are obviously tickled to be passing along intentionally nervy and contrarian attitudes about sex, date rape and sloppy contraception (i.e., having the guy pull out). Clearly they’re being themselves, but that also means deriving a certain delight in pissing off older women who are veterans of feminist battles over the last 30 to 40 years by talking about how…well, listen to them.
Definitely fascinating, although a voice is telling me there’s something degraded going on as well. Something in their “you know, whatever” way of talking — blase urban Valspeak — tells me that certain aspects of the universe are being overlooked by these two. I’d be willing to bet they’ve never read anything by Alan Watts.
Lauren Lipton‘s 5.4.08 N.Y. Times profile of the Jezebel crew reads as follows:
“The Jezebel blog was founded last spring by Gawker Media as a smart, feisty antidote to traditional women’s magazines (or ‘glossy insecurity factories,’ as Jezebel describes them). It quickly developed a loyal following and has seen an influx of new visitors, after being name-checked on the official blog for Gossip Girl, the prime-time soap opera. 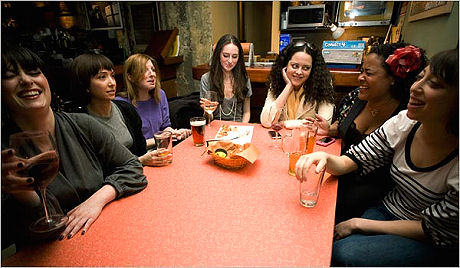 “But as Jezebel‘s first anniversary approaches on May 21, its readers and editors are learning a lesson right out of high school: popularity has its pitfalls, and mean-girl behavior is hard to quash.
“Some readers, in comments on the site, have accused editors of political bias and misogyny. Readers have called one another, by turns, immature, boring and cliquish. This spring the editors responded by banishing certain commenters and putting others ‘on notice’ for being nasty or, worse, not funny.”
I know the name of that tune. Nothing gives me a feeling of greater pleasure than the banning of brutish big-mouths who spew personal venom on the HE threads. I slap those bitches down like dogs, and then boot their ass into the snow.
How do you pronounce Moe Tkacik’s last name? Obviously you drop the “t.” What is it…Kassik?