Last night’s Angelina Jolie tribute at the Santa Barbara Film Festival was arranged when it seemed seemed like a reasonable or even bordering-on-likely prospect that she would wind up with a Best Actress nomination for her Mighty Heart emoting. The fact that it didn’t finally happen (Jolie was probably elbowed out by The Savages‘ Laura Linney) doesn’t change my opinion that her performance as Marianne Pearl in Michael Winterbottom‘s film was the best of her career. 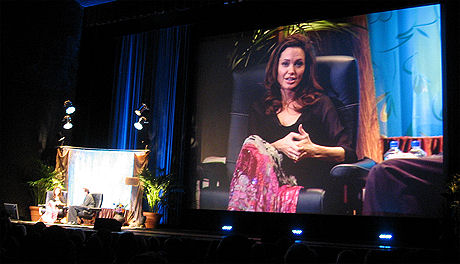 Jolie was affable, cheerful, relaxed on-stage. Pete Hammond handled the questions with his usual ease and aplomb. Clint Eastwood, director of The Changeling, in which Jolie costars, presented her with the fest’s Performance of the Year award.
Before the 8 pm event finally began at 8:35 pm, Jolie and Brad Pitt spent most of their time mingling with screaming (it’s slightly more correct to say “squealing”) fans, taking their time posing for photos and signing autographs and generally paying respects . I was calling it a “Day of the Locust-sized mob” as I stood and marvelled outside Santa Barbara’s Arlington Theatre. The red-carpet paparazzi got to snap photos as Jolie and Pitt strolled inside, but no interviews. (Or none that I noticed.)
The outdoor after-party, held near the Bacara Resort in Goleta, was mostly a bust due to inclement weather and not enough shelter. Heavy sprinkling (i.e., not quite a full-on rainshower but dense enough to turn your hair into a wet floor mop and make your clothes damper and damper, depending on how oblivious you wanted to pretend to be) sent guests huddling under food tents. Local weather has favored the SBFF for many years, but this year precipitation and cool (sometimes outright cold) temperatures invaded. 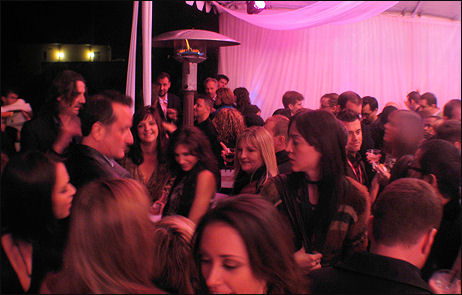 Soggy revelers at the after-party.