With the exception of four or five X-factor types, every person I spoke to at the No Country for Old Men premiere party on Sunday night said they loved it and called it beautifully made and superbly acted and all, but 90% also said “except for the ending, which I’m not sure about.” 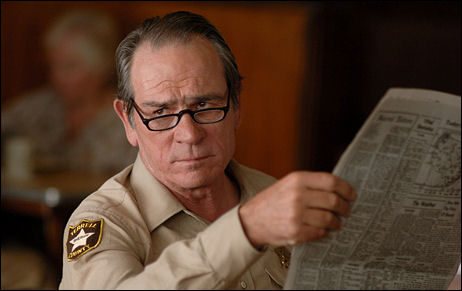 That’s it, I said to myself. If supposedly hip industry types are saying this over and over, it’s inescapable. It’s going to be a huge refrain among the heartland ticket-buyers when No Country opens on 11.21.

The discomfort boils down to a certain level of passivity and inactivity on the part of the good-guy lawman played by Tommy Lee Jones. (That’s keeping things vague enough, I think.) And so I’ve come up with a way to process this so viewers won’t necessarily have this problem when they see it. And all you have to do to understand is to be vaguely familiar with Thornton Wilder‘s “Our Town.”

Jones sheriff character (his full name is “Ed Tom Bell”) has more or less the same function as the narrator in “Our Town.” Nobody complains about the narrator not falling in love or dying or being outside the action of “Our Town” when they see the play, and so nobody should complain about Jones’ character doing the same. He’s a Greek chorus. Is everyone getting this?

Yes, he’s a character in the film — standing around and sizing things up and signing checks and talking to this and that person (including his beautiful wife, played by Tess Harper) and riding a horse in one scene — but he’s not in the story. Period. So no bitching when he doesn’t do the righteous manly sheriff thing at the end of the film because that’s not the deal.