Joni Mitchell, 71, was rushed to the hospital this afternoon after reportedly being found unconscious, She was said to be alert in the ride down to “the hospital” (presumably UCLA or Cedars), but is reportedly in intensive care.

I’ve spoken to a friend who was with her last week, and he said he sensed that all was perhaps not entirely well. Mitchell, he said, had called for “a healer” to drop by and lay on hands or help out in some kind of shamanistic way.

Mitchell has been an unrepentant smoker all her life, beginning at age nine. My friend mentioned that there’s been some discussion (and perhaps an intention) of switching to electronic cigarettes but after six decades of reportedly heavy smoking…God help her. Obviously everyone wants her to recover and push on, but at a certain point the body just can’t take the nicotine and the toxins and complications will manifest. 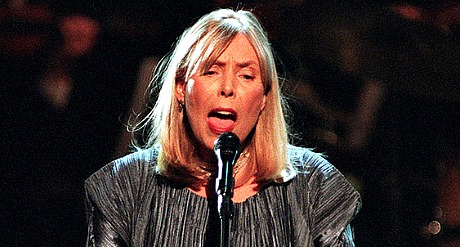 Sidelight: I attended a short, smallish concert that Mitchell gave at Studio 54 in October ’82 to promote “Wild Things Run Fast.” The crowd was not huge, maybe 200 or 250, and I was standing fairly close and pretty much dead center. No female artist has ever touched me like Mitchell **, and I was quite excited about being this close to her. I was beaming, starry-eyed and staring at her like the most self-abasing suck-up fan you could imagine, and during the first song her eyes locked onto mine and I swear to God we began to kind of half-stare at each other. (Some performers do this, deciding to sing for this or that special person in the crowd.) Her eyes danced around from time to time but she kept coming back to me, and I remember thinking, “Okay, she senses that I love her and she probably likes my looks so I guess I’m her special fanboy or something for the next few minutes.”

Mitchell was dressed in a white pants suit and some kind of colorful scarf, and she sang and played really well, and I remember she had a little bit of a sexy tummy going on. Sorry but that had a portion of my attention along with the songs and “being there” and a feeling that I’d remember this moment for decades to come.

On 4.20.12 Variety‘s Jeff Sneider reported about that ludicrous notion of casting Taylor Swift as Mitchell in a film version of Sheila Weller‘s 2008 book, “Ladies Like Us.” Swift was said to be “circling” the Mitchell role. The Katie Jacobs-directed film was going to be shot under the aegis of Sony and Di Bonaventura Pictures. But last fall it was reported that Mitchell had killed the Swift casting. (She told a Sunday Times interviewer that “I squelched that…I said to the producer, ‘All you’ve got is a girl with high cheekbones.’”  She added that the screenplay “is just a lot of gossip… you don’t have the great scenes.”) It was “an appalling idea,” I wrote, “because Mitchell’s manner and speaking style always conveyed the churning soul of a poet and artist, and Swift looks and talks like a none-too-introspective, looking-to-please pop personality. Mitchell is a world-class lady with oceans, rivers and tributaries within; Swift is a pond.”