Joys of the Ride

It is unattractive for any writer to use the word “I” with any constancy, not to mention unwise and unpersuasive. But this 4.6 N.Y. Times article by Matt Richtel is unmistakably and unavoidably the life of yours truly. Reading it ten minutes ago was the heaviest Roberta Flack “Killing Me Softly” moment I’ve experienced in a very long while. 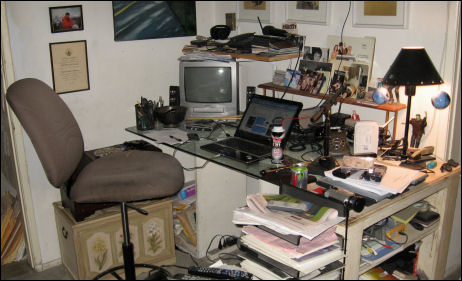 “A growing work force of home-office laborers and entrepreneurs, armed with computers and smartphones and wired to the hilt, are toiling under great physical and emotional stress created by the around-the-clock Internet economy that demands a constant stream of news and comment.
“it is unclear how many people blog for pay, but there are surely several thousand and maybe even tens of thousands.
“Of course, the bloggers can work elsewhere, and they profess a love of the nonstop action and perhaps the chance to create a global media outlet without a major up-front investment. At the same time, some are starting to wonder if something has gone very wrong. In the last few months, two among their ranks have died suddenly.
“Two weeks ago in North Lauderdale, Fla., funeral services were held for Russell Shaw, a prolific blogger on technology subjects who died at 60 of a heart attack. In December, another tech blogger, Marc Orchant, died at 50 of a massive coronary. A third, Om Malik, 41, survived a heart attack in December.
“Other bloggers complain of weight loss or gain, sleep disorders, exhaustion and other maladies born of the nonstop strain of producing for a news and information cycle that is as always-on as the internet.
“To be sure, there is no official diagnosis of death by blogging, and the premature demise of two people obviously does not qualify as an epidemic. There is also no certainty that the stress of the work contributed to their deaths. But friends and family of the deceased, and fellow information workers, say those deaths have them thinking about the dangers of their work style.
“The pressure even gets to those who work for themselves — and are being well-compensated for it.
“‘I haven’t died yet,’ said Michael Arrington, the founder and co-editor of TechCrunch, a popular technology blog. The site has brought in millions in advertising revenue, but there has been a hefty cost. Mr. Arrington says he has gained 30 pounds in the last three years, developed a severe sleeping disorder and turned his home into an office for him and four employees. ‘At some point, I’ll have a nervous breakdown and be admitted to the hospital, or something else will happen.’
“‘This is not sustainable,’ he said.
Even as I read this, I am thinking about the four or five stories that I’ve outlined but haven’t yet written as part of today’s quota. There is no release from this because I can’t imagine not doing it. I feel I have to or else. I know if I don’t I’ll pay the price very soon. The trick is to get beyond feeling this way (the exhaustion and lethargy comes and goes like seasons or rainstorms or Jewish holidays) and flip it over and enjoy it like a pool or a hike or a weekend softball game. The Richtel piece, obviously, is sobering. How could it not be?
But no more sobering than reading statistics about cancer deaths when I was in my early 20s and smoking a pack a day. I did my first quit when I was 24 or 25. It was the first of at least ten attempts that happened on and off for the next 15 years. But I got there.