In order to boost her chances of winning the Best Actress Oscar for her much-admired performance as a victim of Alzheimer’s disease, Away From Her star Julie Christie has, somewhat reluctantly, agreed to submit to a gala tribute by the Santa Barbara Film Festival this evening. It starts three and a half hours from now. 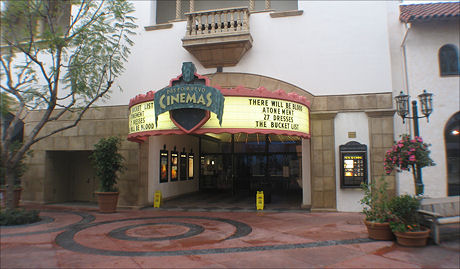 An old-school actress who’s not at all comfortable with Oscar campaigning, Christie is said to be reluctant, antsy, intimidated. Her Lionsgate publicists (she has no personal p.r. rep) had to twist her arm to get her to come to Santa Barbara and are said to be nervous themselves. Festival staffers are trying to be their usual cool-as-a-cucumber selves, but the anxiety virus affecting the Christie contingent has spilled over so everyone’s on pins and needles. Even I’m nervous just writing about this. Do I even want to attend this? I guess I do.
It’s perfectly allowable for Christie to be skittish as she wants. The irony, of course, she’s the odds-on favorite to win the SAG award this weekend as well as the Best Actress Oscar. One reason, as The Envelope‘s Tom O’Neil reported a few days ago, that Lionsgate sent out DVD screeners of Away from Her to the full SAG membership — 100,000 voters — and Fox Searchlight did not do same for Juno. Picturehouse sent 2100 screeners to the SAG nominating committee but not, I’ve been told, the general membership.
Another possible factor favoring Christie is Anglo-xenophobia, which, in this instance, is the SAG/AMPAS version of the Bradley effect. Just as a percentage of voters who said they were for Obama did a racial fold in the voting booth and went for Clinton instead, perhaps SAG and AMPAS members voted for Christie because (a) she’s more akin to their culture, being British and English-speaking, and (b) also something of a Hollywood legend and a rep of the hallowed Hollywood glory days of the ’60s and ’70s, and against La Vie en Rose‘s Marion Cotillard because she lacks these factors and because…I don’t want to say it, but never underestimate the prevalence of small-minded tribal thinking when it comes to such matters.