“Just a quick note of thanks for steering me in the direction of Revolutionary Road,” HE reader James Kent wrote this morning. “My wife and I had a baby this year and haven’t been able to get out to movies with the usual zeal. But I caught up with Revolutionary Road this weekend and really loved it. The subject matter cuts very close to the bone for some, which is probably why it didn’t make it into the Oscar fray. But two things absolutely blew my mind — Roger Deakins‘ cinematography and the performance of Michael Shannon . 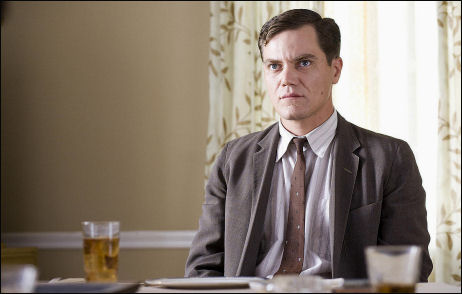 “I suspect if Heath Ledger‘s Dark Knight performance wasn’t a Best Supporting Actor slam-dunker that Shannon would be your surprise winner. I can see the words of his character on the page and there is such a typical cliched way it could have been played. I picture the almost catatonic psych ward patient who mumbles awkwardly at the table, but speaks inappropriate truths at the two dinner meetings like some form of idiot savant. But Shannon does something so unbelievable with that character that I’m gut positive that director Sam Mendes didn’t know what hit him.

“And by the way, Leonardo DiCaprio was robbed. Man, was he good in this film! Winslet too, but I somehow felt she was miscast — didn’t look right to me. I felt the other female characters somehow belonged in that time period, but Winslet somehow didn’t. But that doesn’t diminish her knockout performance for a second. Michael Shannon though–you were right on with this guy. He’s a revelation.”