HE to Larry Karaszewski: Paul Newman aside, Cool Hand Luke (‘67) was an ensemble thing, and if you ask me the six…make that seven standout supporting players are George Kennedy, Strother Martin (“failure to communicate”), the icy prison guard with the reflector shades, Jo Van Fleet, J.D. Cannon, Clifton James and Joy Harmon, the soapy blonde who was washing the car.

I know Dennis Hopper was in it but I don’t recall him saying or doing anything especially stand-outish.

I recall young Lou Antonio’s face from the film, but he didn’t have any stand-out dialogue or business that leapt to the forefront. He’s 88 and apparently in a wheelchair — hope he’s feeling okay and everything’s cool. Is there any video of your discussion? Love to listen in. 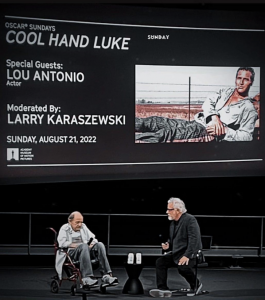