An MTV.com observer at today’s Paramount panel at Comic-Con reports that Karen Allen appeared on a video feed earlier this afternoon to confirm that she’ll have some kind of supporting or cameo role in Indiana Jones IV. 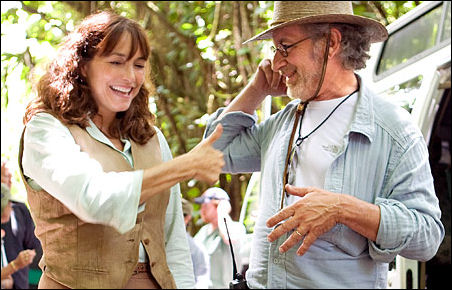 Spielberg and Allen on Indy IV set in Hawaii.

Steven Spielberg, Harrison Ford, Shia LaBeouf and Ray Winstone “were all appearing via satellite when Spielberg left the scene for a moment to [grab] another director’s chair. He came back with a chair with Marion Ravenwood written on it, and of course the crowd went bananas” — bananas? — “and then out came Allen to talk briefly about her return to the series.”
One of my most excruciating movie-watching memories of all time is listening to Allen go “Indiiieee!” in Raiders of the Lost Ark. I saw that movie three or four times during the summer of ’81 (loved it) but Allen’s distress squeal made the second, third and fourth viewings something of a mixed bag.