The most moving thing in Bobby is a recording of Robert Kennedy speaking about the pernicious effect of violence in our culture. It’s heard at the very end of the film. He gave this short speech on April 5, 1968 — one day after he delivered his famous impromptu remarks to a crowd shortly after the death of Martin Luther King was reported, and 29 days before he met his own end from an assassin’s bullet at the Ambassador Hotel. 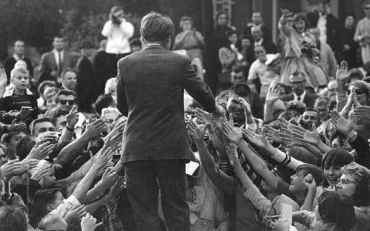 “It is not a day for politics. I have saved this one opportunity, my only event of today, to speak briefly to you about the mindless menace of violence in America which again stains our land and every one of our lives.
“It is not the concern of any one race. The victims of the violence are black and white, rich and poor, young and old, famous and unknown. They are, most important of all, human beings whom other human beings loved and needed. No one — no matter where he lives or what he does — can be certain who will suffer from some senseless act of bloodshed. And yet it goes on and on and on in this country of ours.
“Why? What has violence ever accomplished? What has it ever created?
“Whenever any American’s life is taken by another American unnecessarily — whether it is done in the name of the law or in the defiance of the law, by one man or by a gang, in cold blood or in passion, in an attack of violence or in response to violence — whenever we tear at the fabric our lives which another man has painfully and clumsily woven for himself and his children, whenever we do this the whole nation is degraded.
“Too often we honor swagger and bluster and wielders of force; too often we excuse those who are willing to build their own lives on the shattered dreams of other human beings. Some Americans who preach non-violence abroad fail to practice it here at home. Some who accuse others of inciting riots have by their own conduct invited them.
“But this much is clear: violence breeds violence, repression brings retaliation, and only a cleansing of our whole society can remove this sickness from our souls.
“When you teach a man to hate and fear his brother, when you teach that he is a lesser man because of his color or his beliefs or the policies that he pursues, when you teach that those who differ from you threaten your freedom or your job or your home or your family, then you also learn to confront others not as fellow citizens but as enemies, to be met not with cooperation but with conquest; to be subjugated and to be mastered. 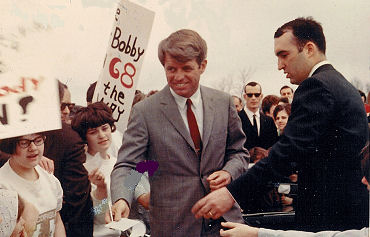 “We learn, at the last, to look at our brothers as aliens, alien men with whom we share a city, but not a community; men bound to us in common dwelling, but not in a common effort. We learn to share only a common fear, only a common desire to retreat from each other, only a common impulse to meet disagreement with force.
“Our lives on this planet are too short and the work to be done too great to let this spirit flourish any longer in this land of ours. Of course we cannot vanquish it with a program, nor with a resolution. But we can perhaps remember, if only for a time, that those who live with us are our brothers, that they share with us the same short moment of life; that they seek, as do we, nothing but the chance to live out their lives in purpose and in happiness, winning what satisfaction and fulfillment that they can.
“Surely, this bond of common faith, this bond of common goals, can begin to teach us something. Surely, we can learn, at the least, to look at those around us of our fellow men, and surely we can begin to work a little harder to bind up the wounds among us and to become in our own hearts brothers and countrymen once again.”
I tried to get a sound file of this speech from the Weinstein Co. publicity, but they didn’t have one to give me. If I were marketing this film I would make dead sure to issue a recording of this speech to every thoughtful-minded website in the world so it could be downloaded by millions and considered and absorbed. This speech sells the intended spirit of Bobby better than anything I’ve seen, heard or read from any source.