Kicks Up A Notch

Roger Michell‘s Morning Glory (Paramount, 11.10) more than held up during my second viewing last night. Here’s my initial reaction and a riff I did on Rachel McAdams a few days ao. The Variety and Hollywood Reporter reviews I’ve read so far are just “what?”. It’s a weird feeling to know that a film works, and then to read a couple of reviews that just veer off the road and crash through a stone wall. What were the authors thinking? Drinking? 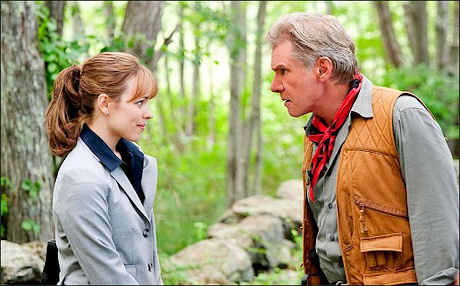 A few wrong turns and a few wrong moves (i.e., broader, more slapstick, more dumbed down) and a different kind of lead actress with different instincts, and Morning Glory could have been a Kate Hudson movie. It could have been painful, predictable, and right-down-the-middle cliched (as the one-sheet and trailer seem to indicate). The difference is in Aline Brosh McKenna‘s script and Roger Michell‘s direction and the quality of the actors and the acting and a certain high-throttle, tightly-wound quality mixed with a generally realistic atmosphere.

Morning Glory is a comedic survival story by way of Rachel McAdams‘ Becky Fuller, a morning-show producer. But it also deals with the lowering or cheapening of TV journalism standards — the pandering to TV audiences interested only in goofiness and personality and glamour. It portrays Harrison Ford‘s Mike Pomeroy, an older distinguished newsman, being sidelined and marginalized and asked to indulge in fluffy banter.

In Broadcast News (which is re-opening, in a sense, on Criterion Bluray in January), an ethical battle is waged serious news vs. fluff, infotainment and ratings. 23 years ago fluff and infotainment (i.e., William Hurt‘s Tom Grunick character) was winning but news (Holly Hunter, Albert Brooks) was still hanging in there. But now, it seems, that ethical battle is over and done with in Morning Glory. And no one is fretting about it. As Fuller says to Pomeroy, “Your side lost.”

Broadcast News was about a hard-news network broadcast show and Morning Glory is about a third- or fourth-rate morning show in the vein of Today — different animals. But the news ethics vs. entertainment debate is very front and center in Brooks film, and in Morning Glory there’s prolonged grumbling from Harrison’s guy about what he’s being asked (i.e, forced) to do. Otherwise there’s no debate or anguish at all about infotainment anchors going shallow or going for the emotion. The broadcast world is what it is, and the game, as always, is about survival and ratings. 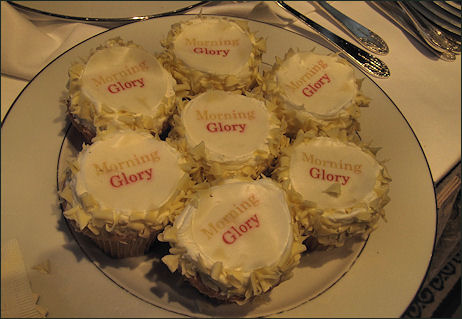 In Broadcast News, Hurt’s Grunick character is portrayed/characterized as “the Devil” — the good-looking smoothie who’s good as selling news and taking down our standards, bit by little bit. He also rationalizes his actions by saying that the news business keeps moving the marker for what is ethical and unethical, and so on.

But — let’s face it — if Tom Grunick and McAdams’ Becky character were to work together, they’d probably get along. She’d enjoy his attitude and personality and find him a nice and amiable professional. She obviously has a problem with Ford’s grumpy Mike Pomeroy (attitude and personality clash), but she and Grunick, I think, would understand each other completely. This is a woman, remember, who’s half into the idea of doing a segment on Pomeroy getting a prostate examination.

Another thing that Broadcast News had was a semblance of a romantic triangle. Holly Hunter wanted to sleep with Hurt, and liked/loved Albert Brooks as a friend. But there’s also a curious romantic triangle in Morning Glory. McAdams/Fuller has sex and evening dinners with Patrick Wilson, but the genuinely driving and “meaningful” relationship she has is with Ford/Pomeroy. Sex with Wilson is strictly a sideline thing, and yet Wilson (unlike Adrien Grenier‘s character in The Devil Wears Prada) never complains about this. He even suggests at the finale that she accept Ford’s offer of an invitation (“He won’t ask twice”).