I knew Don DeLillo‘s Cosmopolis (published five years before the ’08 meltdown) and the basic Ulysses/Odysseus drill. Eric Packer, a young, dead-souled billionaire (is there any other kind?) makes his way across Manhattan in a white, custom-designed, not-quite-soundproof stretch limo, encountering various characters (including his beautiful, not-quite-as-dead-souled-but-getting-there wife) and dealing with all kinds of threats, financial and anarchic, that serve as omens of a coming apocalypse. He’s already lost his soul so all that’s left to do is lose his fortune, which he manages by day’s end. Which strangely comforts him. 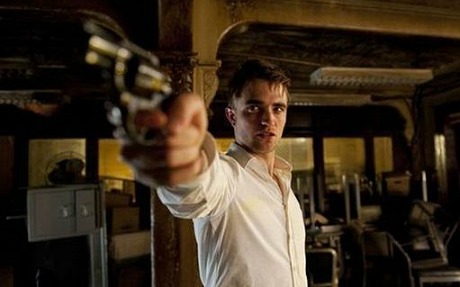 So going into David Cronenberg‘s Cosmopolis, I was asking myself, “What’s going to be new about this? We all know that Wall Street sharks are the compulsive demons of our time and are probably living with suppressed torment of one kind or another, so it won’t do to just say that Packer is a beast and show how devoid he is of humanity. The film will have to say ‘yeah, he’s a beast but he used to be human…see?’ Or ‘he’s more than a beast — he’s an alien.’ Or ‘he’s a beast but there might be a way out.’ Something more than just ‘this guy is all but dead, and you’re going to spend 108 minutes watching him be a zombie as he talks trade and devaluations and currencies and fucks hot women.’

Lamentably, Cosmopolis, which ended an hour ago, does almost exactly that. And with non-stop chatter so compact and persistent and airless your ears will eventually fall off. With the same determination that Packer — played by Robert Pattinson with his usual glum, shark-eyed passivity — takes himself down, Cosmopolis talks itself to death I was dying for a little silence, a little quiet outside the limo…a sunset, an empty, wind-swept boulevard at pre-dawn, an encounter with a friend or two. Oh, that’s right — Packer hasn’t any.

And so Cosmopolis is about a dead guy in a run-of-the-mill Men in Black/Reservoir Dogs suit as he talks about trade and devaluations and currencies and dead Russian rats, and hears from Samantha Morton (what’s with her weight?) how the future is sucking the life out of the present, and fucks hot women — Juliette Binoche and a black actress whose name escapes. And watches with faint amusement as enraged protestors throw dead rats around and carry huge paper-mache rat sculptures through midtown and spray-paint his limo, etc.

It’s too familiar, too regimented, too claustropobic, too obvious. Yes, you’re constantly aware of Cronenberg’s fierce behind-the-camera talent, his determination to stay with his apparently quite faithful screenplay of DeLillo’s book and to not cop out by making a film about how Packer used to be human but is now an alien although there might be a way out. That’s not the Cronenberg way. He gives it to you his way, and you just have to sit there and take it. 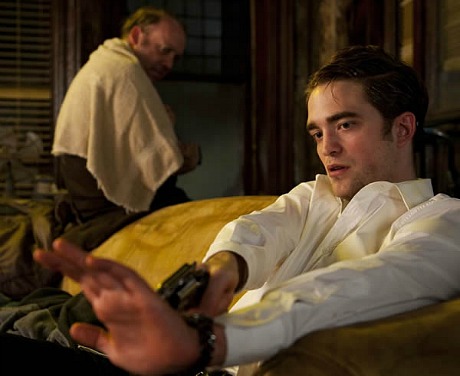 This movie made me feel the way Cronenberg’s Naked Lunch did.

It says something (or maybe not) that one of the most emotionally affecting things that happen is when half of Pattinson’s haircut is mutilated by a kindly neighborhood barber.

I’ll give Cosmopolis this: it ends really well. With a plea from Paul Giamatti‘s destitute, beaten-down, unemployed everyman, begging Packer and his kind to come to their senses and stop their horrendous games and stop plundering and devouring and chewing everything up and regurgitating it as corporate mulch. But even the Giamatti scene (which is the finale) is way too talky. I can’t decide if this scene is oppressive or suppressive. Maybe both.

All right, that’s it — I have to catch my bus to Nice Airport. But before I do, a smattering of tweets:

“A surreal capitalist comedy of how the titans who build the world are small, broken people. Rapid-fire dialogue with bullet holes. [In] the part of a dead-eyed consumerist shark wreathed in unearned success, Robert Pattinson is a great fit.” — MSN’s James Rocchi.

“Cosmopolis trailers are INCREDIBLY misleading about its pace and tone. Expect lot of “wtf?” and “That’s IT?” from general audiences.” — Filmland Empire.

“Blown away by Cosmopolis at Cannes. A film of cool, diamond brilliance. Perfectly fitted, a tale for the times. Note to jurors: this one.” — The Guardian‘s Xan Brooks.

“Wish I could rewatch Cosmopolis before writing a word about it. For now, it’s both too much and too little; I’m both impressed and deflated.” — Guy Lodge.

“A blockbuster of the mind, fascinating as much for what Cronenberg shows us as for what he doesn’t show.” — Toronto Star‘s Peter Howell. 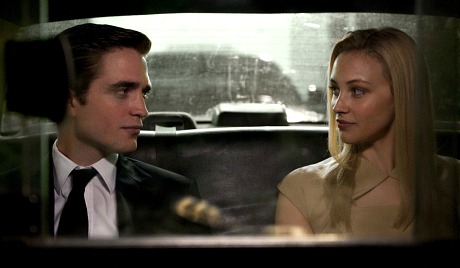