Wall Street Journal reporter Thaddeus Herrick wrote yesterday (8.29) that “some” in the real-estate industry “believe that real-estate swashbuckler Sam Zell, who is in the process of buying the Tribune Co. (i.e, owner of the L.A. Times), could sell its properties, including the Los Angeles Times building.” Zell declined to comment for the piece, and “most real-estate experts acknowledge that the value of the Tribune Co.’s real estate is minimal compared with the company’s overall assets,” Herrick reported. 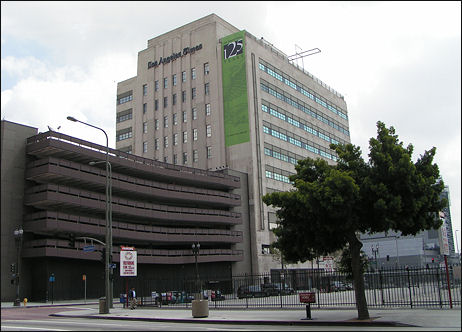 If I were Zell I would go all Genghis Khan on the L.A. Times. No one half-complicit in deadwood dilletante-ism would be safe from my terrible swift sword. I would slash the people who are holding on just to hold on (including as many sacred-cow upper-level execs as possible) and unload the Spring Street building and move the staff into some less pricey warehouse space in Flintridge or La Canada. I’d have a lot more reporters work from home and maybe come into staff meetings once a week, if that.

You don’t need lavish central headquarters. You don’t need all the flush perks. You don’t need highly-paid editors driving big fat SUVs out to their McMansions in Westlake Village. It’s time for everyone to start living like Parisians (I’ve been there — they ride to work on buses or the Metro, or on scooters) and live outside of the lazy corporate-comfort membrane. It’s time to downsize and get rid of the apparatchiks and gravy-train riders.

We all know the heyday of the L.A. Times is over. I love all the Calendar reporters and critics (Horn, Goldstein, Turan, et. al.) but everyone I know hates the big messy thing itself, particularly those awful , brightly-colored pull-out promotions and the feeling that you’re contributing to the decimation of the Northwest forests every time you buy it. I don’t know a single soul who really loves the L.A. Times, and I’ll bet thousands hate it as much as I do. (A friend just told me the other night she’s cancelling her subscription…good!) I know this will be painful for employees, but the sooner that this messy and flatulent lump of a newspaper is finished the better it will be for Los Angeles because something new and more vibrant and essential will take its place. On to the new and off with their heads.