“Perhaps Mike Tyson was fortunate to have avoided school and society, inasmuch as his grim early years were the only background that could have produced the inexorable force that he became,” writes New Yorker critic David Denby in his current review of James Toback‘s Tyson. “What this early life couldn’t do, however, was protect him from the many dangers outside the ring. 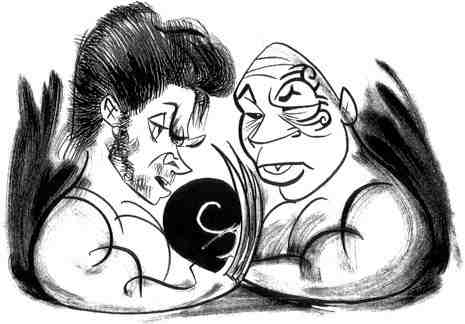 “Without the guidance of Cus D’Amato (who died when Tyson was nineteen), he fell among idolaters and users, and blew tens of millions of dollars, as he admits, on houses, cars, clothes, girls, drugs, parties, every kind of excess, to the point where the man who was once the wealthiest fighter in history winds up beached (literally — Toback photographs him facing the sea), stranded amid debts and visits to rehab clinics.

“In that long descent, Tyson acted out his sense of worthlessness. If he cannot be king, he will be nothing; the middle, he says, doesn’t suit his temperament. What he offers Toback’s camera now is savagery recollected in tranquillity — the baddest man becalmed into a state of articulate self-awareness. That victory, at least, no one can take away from him.”