I really don’t think there’s a need for another Chris Nolan Batman film now. On the audience end, I mean. From the Warner Bros. end they’ll absolutely make another one regardless because of the money, obviously, but The Dark Knight has done it, said it and triple-noired this already gloomy urban legend all to hell. No Bat franchise super-villain is ever going to top Heath Ledger‘s Joker so forget it. Job well done, now leave well enough alone. 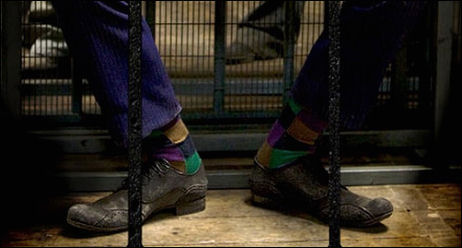 I feel like I’ve had a great gourmet meal this morning, but in perhaps too-great amounts. And I don’t want any more rich foods in my system for a long while. I sincerely admired The Dark Knight but I want to be a vegetarian now, thank you. 177 aural chest whomps, seven or eight building falls, one big flipped-over truck, 78 or 79 wrecked cars, 78 million shards of shattered glass…all right already! The meat has been pounded flat. I feel pounded in a good way, yes, but pounded nonetheless.
And as sated and satisfied as I now feel, I don’t want to do this again for years. In fact, never again. I’m saying this with full-on respect. This not a back-pedal. It’s an “okay, cool…now I need a break for the next couple of decades” riff.
Anyone who helped to dream up, make and/or market The Dark Knight has reason this morning to feel enormous pride and satisfaction. I don’t mean to sound un-American or un-greedy, but what if all these folks were to step back, take a breath and let it go?
I really don’t care about Christian Bale‘s Batman taking the rap…oh, that’s right, I can’t talk about the last act. I’m just saying it feels “complete” regardless of the hanging thread, which I didn’t care all that much about. Threads are always hanging in movies. Nothing is ever resolved. My life is hanging by a thread. There are no ends, only means. I’ll sleep when I’m dead. 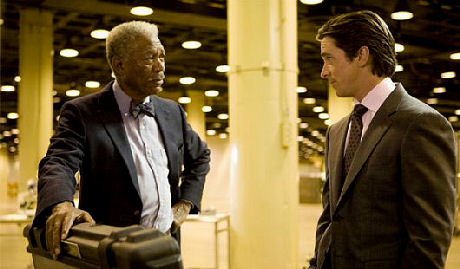 Where is it written that super franchises have to keep going until they fail by ruining or diluting the original magic and making everyone sick of them? The corporate Bat boys should think about showing a little class, is all I’m saying. Take a bow, count the money, open your hearts, get creative and think up something else that will earn several hundred million in various currencies.
A strong story has been told, and the best villain we’ve ever seen in a movie like this has been captured for all eternity, so back off and stop beating this thing to death. The corporate mentality is constitutionally incapable of hearing what I’ve just said — I realize that. I just thought I’d throw this idea out there because it would be, I feel, a sublime gesture on Warner Bros.’s part. Not that they would or could go there.
Deep, dark, longish and almost Macbeth-like in its meditations, The Dark Knight is a class act that will never suffer a re-assessment from me because it’s made of solid mahogany. But my basic take is, apart from a thousand different satisfactions, that I don’t want to get bogged down in the philosophical mumbo-jumbo of it all. I could have done with about 20 or 30 minutes less of it. Which isn’t to say that the length gave me pain. It didn’t. I just like movies better when they’re smarly pruned down. Don’t we all? Who likes girth for its own sake?
We are a deluded people living in a dark time, this movie is saying. Our culture is besieged by madmen, thugs and feral urban terrorists. Everyone is afraid, nobody knows the truth, nobody knows what to do but we need a tough good-hearted leader to look up to. And what else? Oh, yeah — the heroic Batman and the evil Joker are both freaks under the skin, and regarded as not all that different so what’s the difference? I think that more or less covers it. 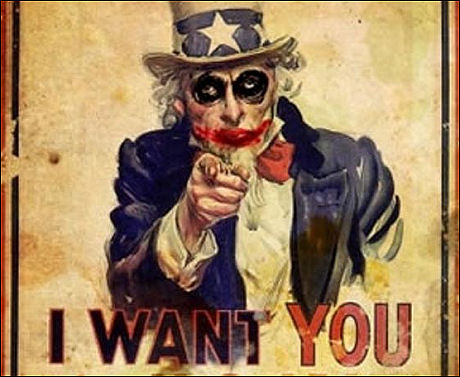 How much of this got to me deep down? Some. Okay, not that much. Is the script some kind of truthful reflection in the pan of the world we’re actually living in now? Yeah, and I respect the Nolan brothers for having strengthened their hand in this fashion. But The Dark Knight‘s burdensome aspect,for me, is the relentless spouting of cryptic noir theology by each and every major character — Batman, Aaron Eckhart‘s Harvey Dent, Michael Caine‘s Alfred, Morgan Freeman‘s mellow engineer guy, etc.
The thoughtfulness is what makes the film stand tall, yes, and yet I wasn’t moved all that much (or I was moved only marginally) by this effort. What moved me was the intelligence, the adult layering, the constant story tension, the velocity, and the refusal to..well, indulge the usual third-act finale shenanigans. But the thing that lifted me up and sent me to the velvet pleasure chamber was Greasy Madman Heath — his flicking tongue and white face and red lipstick and skanky hair and heavenly sharp-toned snarl.
I love this Carrie Rickey line from her Philadelphia Inquirer review: Boiled down, Knight asks whether “the dark and stormy knight (Christian Bale‘s Batman) can defend Gotham City from Osama Bin Gene Simmons?”
This is a good one also: “When the Joker puts the moves on Maggie Gyllenhaal‘s Rachel, it marks Ledger as the only actor to come on to both Maggie and her brother, Jake, on-screen.”
I just realized I haven’t said a single thing about anyone else’s performance. Okay, here goes. Bale is fine but on the dull side. Eckhart is actually touching at times…tragic. Freeman and Caine phone it in. Eric Roberts, playing a gangster, delivers some nice seasoning. Maggie Gyllenhaal does a fine job. There are other stirring, noteworthy supporting perfs. But the fact that I was moved to mention them out of guilt says something. 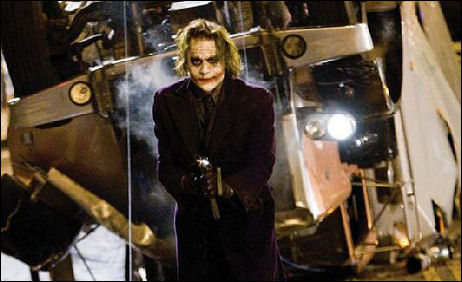