In his usual perfunctory way, N.Y. Times reporter Michael Cieply has reported on the bad-internet-buzz-chasing-Indy 4 story (“Indiana Jones Is Battling the Long Knives of the Internet”). He’s ignored, however, what may turn out to be the most interesting aspect of reactions to the film. 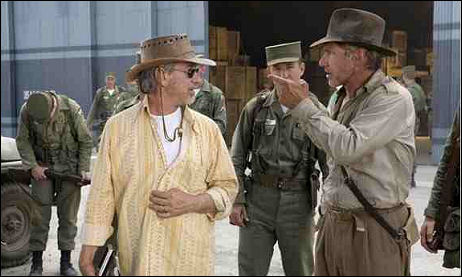 This, as I wrote two days ago, refers to a possible generation gap with older viewers liking it (or at least finding a place in their hearts for it) and younger viewers being less enthused, at least in part because the film has allegedly been infused with an older guy’s (i.e., Steven Spielberg‘s or Indiana Jones‘ — take your pick) perspective, which wouldn’t be surprising.
According to a good friend of a southern-region exhibitor who passed along some opinions last Wednesday evening, the only viewers at last Tuesday afternoon’s exhibitor screening who liked it “were the older guys.”
Older vs. younger reactions to Indiana Jones and the Kingdom of the Crystal Skull (Paramount, 5,.22) is interesting, and also ties in with the subject and theme of the film. Generic “bad buzz,” which Ciepley’s story says is percolating out there, is a flavor-less story…a yawn.