Some people who saw Judd Apatow‘s Knocked Up at South by Southwest (including Variety critic Joe Leydon) are doing cartwheels. Leydon is calling it “uproarious…more explosively funny, more frequently, than nearly any other major studio release in recent memory…indeed, even more than the filmmaker’s smash-hit sleeper The 40-Year-Old Virgin.” 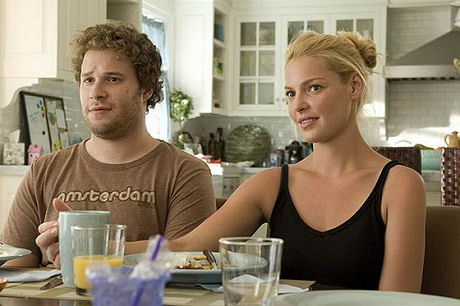 I’m sure that’s great news for those of us who didn’t laugh all that much at Virgin. I know I’m not the only one who felt that most of the comedic material in the first hour (i.e., before the better, more emotionally wholesome second-half portion with Catherine Keener) was too broad and coarse and…I don’t know, too snapping- bath-towel? As well as, like, way too Seth Rogen. A nurse ripping off Steve Carell‘s chest hair with a bandage…yawwww! A pretty drunken blonde girl vomits in Car- ell’s lap…funny! I guess I need to watch more ESPN and eat more hamburgers and grow hair on my back.

I’m glad Knocked Up is hitting a nerve — good for Apatow, I don’t begrudge — but Knocked Up has, in my eyes, a massive credibility problem. The problem is that blonde German- descended shiksa women like Katherine Heigl, who plays a successful on-camera correspondent for E! Entertainment in Apatow’s film, never give the time of day to unemployed, stubby-faced party animals like Seth Rogen, especially when he looks like a chunky beer-head who hasn’t exercised since 1997. Not even if she’s dead drunk on shots of tequila.

In real life (i.e., outside the Apatow realm), Heigl women never fuck Rosen-type guys because they can do better and they know it — it’s that simple. The only way it could possibly happen in actuality would be if the Rogen type was (a) extremely rich, (b) extremely funny or (c) extremely well-connected in the enter- tainment industry…but let’s be honest and admit that such situations are excep- tions to the rule.

In short, and to coin a phrase, “Houston, we have a problem.” Apatow does, I mean. If anyone besides myself is inclined to consider such things. I say this realizing that 93% of the audience won’t care. To those 7% — those few, those hallowed few — hold fast!