For perversity’s sake or simply to alleviate boredom, I’m going to briefly riff on Judd Apatow‘s Knocked Up (Universal, 6.1) by sampling and counter-punching Joe Leydon‘s South by Southwest Variety review, which was (I want to describe it carefully) Niagara Falls orgasmic. 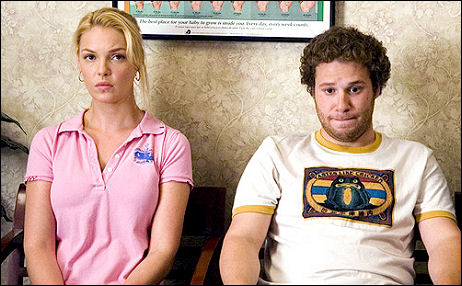 I agree with many of Leydon’s reactions. Knocked Up is Apatow’s best film so far, it’s graced with Seth Rogen‘s star-is-born performance, and the fact that it’s a caring, human-scale look at growing up and coping with responsibility means it’ll probably connect with women as well as men. But the bearded Houston critic over-gushed here and there.

Knocked Up is not generically “uproarious.” It’s a gentle and amiable relationship comedy that is, yes, often funny and uproarious when it’s in the mood to be that, but to use “uproarious” as a bottom-line adjective is misleading. The film is often very funny when it wants to be (i.e., maybe two-thirds of the time), but Apatow’s goal is not to bust your seams and make you lose consciousness from rolling in the aisles and gasping for breath. I counted less than ten really big laughs. Then again I don’t get high any more, I don’t have back hair or a sandpaper fuzz beard, I don’t relate to guys who wear Fruit of the Loom T-shirts (especially ones that say “Amsterdam” on the front), and I try to keep my weight down

Leydon would have you think that Knocked Up is one of those comedies that builds and builds and get wilder and wiggier in some expertly constructed Billy Wilder-like fashion. It’s not. It’s a likably mellow and mostly believable “maintainer comedy” that goes from scene to scene and chapter to chapter with more or less the same energy and the same pacing.

All first-rate comedies are built upon deep-down emotional issues, and all second-rate comedies are just about trying to get laughs any way they can, no matter how cheap the tactic. Knocked Up has a lot of great stoner-gorilla “hoo-hoo” bits (there’s a moderately amusing riff on Steven Spielberg‘s Munich), but the best parts of it aim higher. It has a loutish streak and is definitely sloppy in certain respects, but don’t take Leydon’s claim that “line for line, minute to minute, [it’s] more explosively funny than nearly any other major studio release in recent memory” to the bank because the check will bounce. 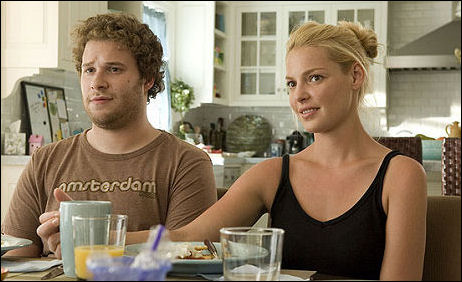 That said, Leydon’s prediction that Knocked Up is “bound to generate repeat business among ticket-buyers who’ll want to savor certain scenes and situations again and again if only to memorize punchlines worth sharing with buddies” may turn out to be true. The jokes that work are very, very funny. It’s an obvious crowd-pleaser.

But it’s not one of those “stop whatever you’re doing and go see this thing right now” movies. It doesn’t blow your mind or reinvent the wheel. I was happy watching it, but can’t say I ever said “wow, this is amazing.” Because it plays to both sexes, Knocked Up will probably be very commercial, but I wonder about Leydon’s claim that it will “remain in megaplexes throughout the summer and, possibly, into the fall.”

That’s all I’m going to say for now. I’ll get into Knocked Up a bit more next month — just before the Cannes Film Festival begins, or maybe even during — but there’s obviously plenty of time before it opens on 6.1.