Restoration guru Robert Harris, who orchestrated the immaculate and much-respected 1991 restoration of Stanley Kubrick‘s Spartacus, has sharply criticized Universal Home Video’s soon-to-be-released Bluray of this 1960 epic. Actually, “sharply criticized” doesn’t quite describe it. “Torn it a new one” is closer. 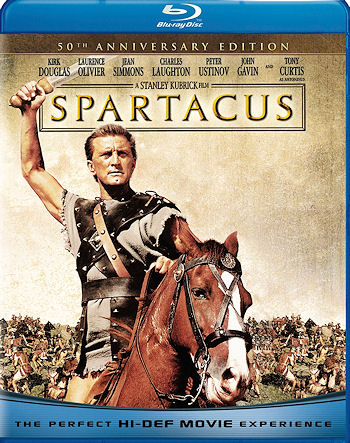 The film that Harris painstakingly restored has been turned “into a sideshow pipsqueak, an ugly and unfortunate bit of home video fodder, which would be far better suited to VHS,” he writes in a 5.12 Home Theatre Forum posting. “I would suggest a recall. Spartacus on Blu-ray could have been as Mr. Kubrick wished it to be — a heroic and majestic piece of epic entertainment. With a simple new image harvest, Spartacus could be a piece of brilliant Blu-ray software.

“As it is, Spartacus receives an absolute and undeniable fail.

“After doing a comparison of the HD vs. the new Blu-ray, here’s what I’m seeing:

“The video noise, inherent in the HD master, is gone. That’s a good thing, but keep in mind that it should never have been there to begin with. In removing the noise, all grain is also gone, replaced by what appears to be a pleasant sheen of artificial film grain.

“All of the detail captured by Academy Award winning cinematographer Russell Metty‘s meticulous large format Technirama camera, for which he won an Academy Award for Best Color Cinematography, is unfortunately also gone.

“All high frequency information has been lost, and with it all of the detail in the image.

“In its place the newly softened image has been electronically sharpened. We now have a halo. Contrast has been boosted to make the image appear sharper than it is, but this is perceived as opposed to actual sharpness. Fortunately, possibly based upon the new software, we have not gone plastic. 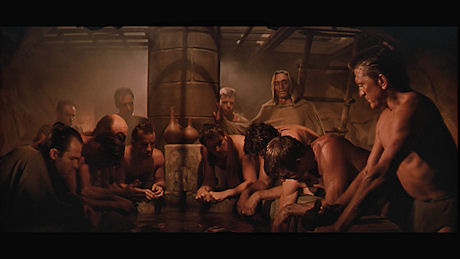 “During the restoration of Spartacus, we went through numerous tests to find the optics that could reproduce the immense amount of detail found in the original elements. I recall one test that we screened in the Hitchcock Theater at Universal. The image quality wasn’t quite there. It was slightly soft. When I mentioned that detail was missing in the wood that surrounded the gladiator’s arena, one of the gentlemen from the post house responded ‘But you can see the wood grain.’

“I distinctly remember getting an elbow in the ribs at that moment from our tech assistant, Mike Hyatt. He knew where this was going. What we needed to properly represent Mr. Kubrick’s film was not the ability to see the wood grain, but rather to see the insects eating their way through the wood grain. Within two weeks an optical system was put in place that enabled us to reproduce the information as exposed to the original elements.

“In Universal’s new Blu-ray release of Stanley Kubrick’s Spartacus, you can almost see the wood grain, but now that grain is covered in electronic enhancement, halos and unnecessary contrast.

“The pity is that Spartacus, like Out of Africa and Elizabeth, makes Blu-ray appear to be something that it is not — a flawed technological system for viewing motion pictures in home theaters. I was hopeful that the lessons learned with the Blu-ray releases of Patton, The Longest Day and Gangs of New York might have been taken to heart.