“There is no room for the idea that Kyle might have been a good soldier but a bad guy; or a mediocre guy doing a difficult job badly; or a complex guy in a bad war who convinced himself he loved killing to cope with an impossible situation; or a straight-up serial killer exploiting an oppressive system that, yes, also employs lots of well-meaning, often impoverished, non-serial-killer people to do oppressive things over which they have no control. Or that Iraqis might be fully realized human beings with complex inner lives who find joy in food and sunshine and family, and anguish in the murders of their children. Or that you can support your country while thinking critically about its actions and its citizenry. Or that many truths can be true at once.” — from Lindy West’s 12.6 Guardian piece about the real Chris Kyle, the late sniper portrayed by Bradley Cooper in Clint Eastwood‘s American Sniper, which a fair number of Academy people are apparently liking and intending to vote for, or so I’m told. 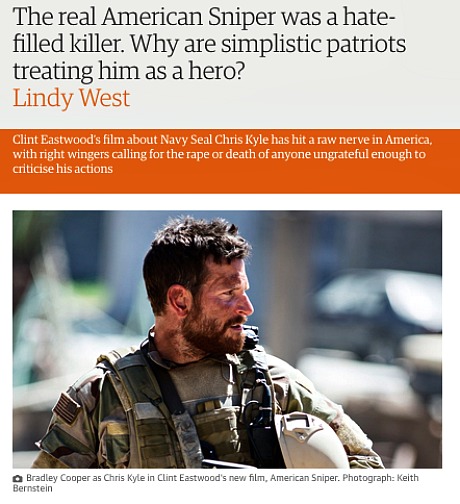 I didn’t pay much attention to the allegations about the incomplete or sentimentalized portrait of Kyle in Eastwood’s film (the first significant piece about the real Kyle popped last August) because I thought it was…well, somewhat interesting but not exactly a headline story as my estimation of American Sniper was/is respectful but muted, and I presumed most people would agree and that it wouldn’t catch on.

From Kyle’s Wiki page: “In interviews with both the Opie and Anthony Show and Bill O’Reilly in January 2012, Kyle claimed to have punched former Minnesota Governor and Underwater Demolition Team member Jesse Ventura at a bar in Coronado, California, in 2006 during a wake for Mike Monsoor, a Navy SEAL and Medal of Honor recipient killed in Iraq. Kyle, who wrote about the alleged incident in one of his books, never mentioned Ventura by name, claiming that Ventura was “bad-mouthing the war, bad-mouthing (former President) Bush, bad-mouthing America” and had said that the SEALs ‘deserved to lose a few guys.’

“In a subsequent interview, Ventura denied that he was punched by Kyle, saying he had never even met Kyle nor heard of him. Ventura adamantly denied making any derogatory remarks about the military.

“In January 2012, Ventura filed a lawsuit against Kyle for defamation. After Kyle’s death in February 2013, Ventura announced he would continue his lawsuit by adding Kyle’s estate as a defendant.The trial began on July 9, 2014. On July 29, 2014, after six days of deliberations, and upon the agreement of both plaintiff and defendant to accept a divided jury verdict where 8 or more of the 10 jurors were in agreement, the jury arrived at an 8 to 2 divided verdict in favor of the plaintiff, and awarded Jesse Ventura $1.8 million.”