The L.A. Times finally runs its own official Eddie Murphy takedown piece, separate from the stuff Tom O’Neil ran last week in The Envelope. It happens to be in the form of an article about how much damage Norbit (which a friend saw and hated last night) is doing to Murphy’s chances of winning a Best Supporting Actor Oscar for his pretty-good-but- that’s-all performance in Dreamgirls. 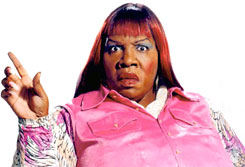 “Every time I pass that billboard, it makes me sick,” a veteran Oscar consult- ant tells Times staff writers Greg Braxton and Robert W. Welkos. “I think his performance in Dreamgirls‘ is so fabulous” and deserves to win the Academy Award. But, he added, Murphy’s latest comedy offering “doesn’t help.”

To paraphrase a line that Charlton Heston says in Ben-Hur, “When and if Murphy loses the Best Supporting Actor Oscar, a cry will rise up throughout the land.”