Heath Ledger “was always hesitant to be in a summer blockbuster with the dolls and action figures and everything else that comes with one of those movies,” the late actor’s friend and agent, Steven Alexander, tells Peter Biskind in an upcoming Vanity Fair. “He was afraid it would define him and limit his choices.” 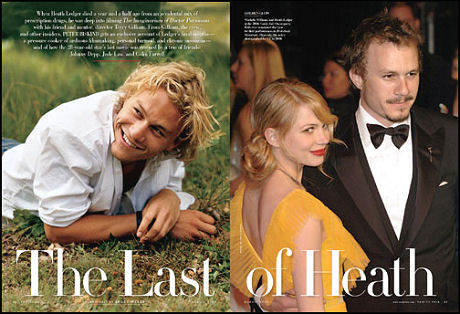 Alexander and other confidantes tell Biskind that “one of the reasons Ledger agreed to do The Dark Knight was that it would be such a long shoot it would give him an excuse to turn down other offers. Ledger had a pay-or-play deal on The Dark Knight — meaning he’d get compensated no matter what — so he felt he had the freedom to do whatever he wanted as the Joker.”

He hoped in fact, that “his performance would be so far-out he’d be fired, and thus become the beneficiary of a lengthy, paid vacation.”

Which is why his Joker performance was so great. Because Ledger didn’t care. The best creative work always….okay, often comes out of a fuck-it mindset. Worry about what you’re going to create or whether or not you’ll be good enough and you’re dead.