A restrained, decently crafted drama about growth and awakening, The Girl, which I saw Saturday at the Tribeca Film Festival, gives Abbie Cornish a chance to bite into a meaty part. She plays Ashley, a not-blazingly-bright San Antonio mom who’s lost custody of her son due to a drinking issue, with quiet intensity and, to a large extent, authority. This is Cornish’s best part since…what, Candy? She’s a solid actress trying to do the right career thing, and she’s definitely scored here. 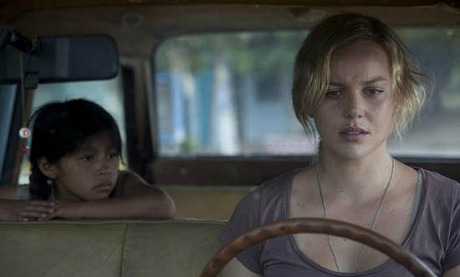 And yet Ashley doesn’t act in a way that exactly elicits sympathy or identification. She’s always a beat or two behind the audience in figuring out her next move. She gradually wakes up and flies right, but a lot of stumbling happens along the way.

Director-writer David Riker begins with Ashley losing her low-rent job at an Austin (or is it San Antonio?) super store due to pissing off her boss. Ashley is pretty and bilingual, but right away you’re noticing she’s not all that together. She’s trying to get her son back through the courts but is emotionally impulsive and undisciplined and seething about everything. Right away you’re saying “I don’t know if she’s going to make it through all the hoops.”

And then along comes Ashley’s boozing, bewhiskered truck-driver dad (Will Patton) with an offer to join him at his Mexican home for a night of tequila and celebration. Ashley knows that she has to fly straight if she wants her son back, and that child services will be paying unexpected visits to her trailer home to check on her habits…and she drives down to ole Mexico to throw down some tequila with her grungy loser dad?

Patton tells her the next day that he’s making good dough by smuggling illegal aliens across the border into the U.S.in his truck. This plants a seed. Ashley needs money badly, and eventually decides to bring four or five illegals across on her own. But she hasn’t thought things through and is rather stupidly presumptuous about the conditions of a river that the illegals will have to cross, and tragedy strikes a mother in the group, leaving her young daughter (Maritza Santiago Hernandez) alone and destitute. 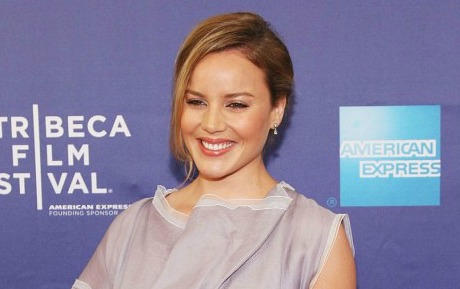 The movie kicks in when Ashley realizes that she’s responsible for this tragedy, and that she’s obliged to help this little girl in some way.

We realize, of course, that this is the point of the film — for Ashley to woman up and get past her resentments and weaknesses by helping this little girl. And of course, it’s the young girl who ends up helping her. It takes a while but Ashley eventually sets things right, and is presumably in a better frame of mind as far as getting her son back and being a good mom, etc. And Riker lets her off the hook by having the young girl’s grandmother tell Ashley that the river killed the mom, and that it wasn’t Ashley’s fault. But it was, obviously, to a large extent.

All in all The Girl is a nicely subdued humanistic tale, but I can’t honestly say that I felt all that much support for Ashley, although Cornish does a fine job of portraying her as far as she goes, warts and all. Hernandez registers as the more forceful and clear-headed of the two, truth be told.