In Morgan Spurlock‘s The Greatest Movie Ever Sold, “the viewer is left to wonder who is getting played: the brand, the filmmaker or maybe even the audience,” writes N.Y. Times media columnist David Carr. “Ralph Nader has spent much of his career speaking out against corporate manipulation of consumers. But in one of the movie’s funnier moments, he receives a gift from Mr. Spurlock of Merrell shoes — one of the film’s sponsors — and proceeds to give the company a pretty nice endorsement on the spot.” 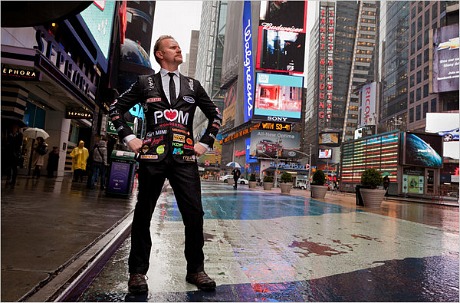 “‘Ralph told me that you have to be careful with satire because you could literally spoof yourself out of your objective,” Spurlock tells Carr. “I think we did the job of walking that line, being questioning, being critical, but not spoofing ourselves out of our objective.”