A friend sent me this photo yesterday. It’s a groaner when someone else says this, but it’s a shame, really, that you can’t really feel the full exuberance while you’re young. I know…shut up! What I mean is not that it’s a shame that things are currently…well, a wee bit dismaying from a biological standpoint (actually not that bad), but that so much of my youth was beset by poverty, anxiety, rejection and fear of what the future might bring (or, more to the point, what it might not bring) that I couldn’t really enjoy it. I was pretty much a lad of constant fretting. 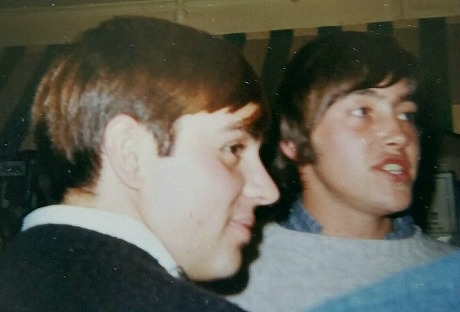 I did enjoy things to some extent (okay, sometimes to a great extent) but so much was weighing me down. I felt the music but the rent was constantly due, not to mention my inability to pay for the serious tune-up that my VW Fastback desperately needed, not to mention all those unpaid parking tickets. Then again I was batting a good .400 or so with the ladies, so there was that. Water under the bridge. But I don’t where I got that sweater or where the hell I got the idea that it would be cool to, you know, wear it.

So I was unhappy but also happy as my first and only Godhead enlightenment phase via LSD and the Bhagavad Gita had recently kicked in, and that was (and very much remains) a seriously profound and joyous thing. A lucky break that was, and for which I owe old pally Chip Stewart, who guided me through those first three or four mystic excursions, all the gratitude in the world.