Spike Lee‘s untitled World War II drama, based on James McBride‘s “Miracle at St. Anna“, is apparently going to play like an American riff on Rachid Bouchareb‘s Days of Glory (i.e., Indigenes), the 2006 war film about French-speaking North Africans fighting for the French during World War II and dealing with prejudice in the ranks. 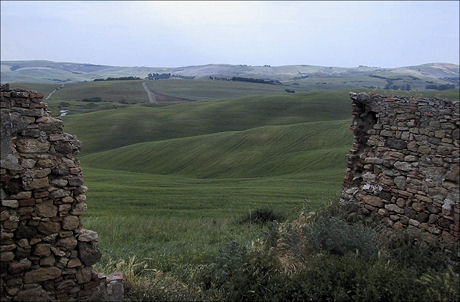 This is definitely the kind of topography you want to shoot a World War II film upon (i.e., taken by myself in an area south of Volterra in 2003)

Lee said during a recent Rome press conference to announce his film that “if you look at the history of Hollywood, the black soldiers who fought World War II are totally invisible,” adding that the film would be about the “paradox” of “black people who were fighting for democracy but at the same time were second class citizens at home.”
Lee will begin shooting the film early next year at Rome’s Cinecitta Studios, in Italy’s Tuscany region — nice! — and in New York City.
An Amazon synopsis for McBride’s book suggests it’s also going to be a bit like Sydney Pollack‘s Castle Keep: “Miracle at St. Anna vividly follows four of the U.S. Army’s 92nd Division of all-black buffalo soldiers as they become trapped between forces beyond their control and between worlds. Three of the soldiers have bolted behind enemy lines to rescue their comrade, the colossal, but simple Private Sam Train.” (Who could Lee have in mind for this role, I wonder?)
“They find themselves stranded between worlds in a remote central Italian village, with the German Army hidden on one side and their racist and largely mismanaged American commanding officers on the other. The strange world of the village floats between myth and reality, where belief in magic coexists with the most horrific acts of war. In the melee that opens the book, Train suddenly comes to believe he can turn invisible, the local miser believes he is cursed with a wealth of rabbits, and each of the other soldiers also exists in a mythical world of his own. But they are all about to be shattered by the Miracle.”
“Magical”, “myth and reality”, a psychologically confused soldier who thinks he’s “invisible”, a miracle”? If Lee’s movie turns out to be half as fantasy-driven and airy-fairy as this synopsis suggests, it’s going to suck eggs. Mix in the fanciful stuff with Lee making a point about the military treating the Buffalo Soldiers like shit…forget it. Too much in the pot.