Sam Taylor-Wood‘s Nowhere Boy, which premieres tonight at the London Film Festival, is a marginally effective, vaguely muffled chick-flick account of John Lennon‘s teenage years in Liverpool, circa 1956 to ’60. I’m not calling it dull, exactly. Somewhat underwhelming? I respond best to films about transcendent, climb-out-of-it responses to problems rather than ones that mainly portray the muck and the grief of things. And Nowhere Boy‘s somewhat feminized, all-he-needs-is-love story just didn’t turn me on.

But before I get into it I need to stop and report something phenomenal (and I don’t mean to sound like a fiendish hard-ass in saying this). See Nowhere Boy for the Lennon curiosity factor or for the moderately good reviews it may receive down the road, but it primarily needs to be seen for one of the most grotesque miscastings in motion picture history. I’m speaking of Taylor-Wood’s decision to hire Thomas Brodie Sangster — a pint-sized, pencil-necked, chipmunk-faced actor — to play Paul McCartney.

Everyone knows the teenage pompadoured McCartney was sort of Elvis-y looking, and that he was more or less the same size and weight as Lennon. Sangster looks like a growth-stunted audio-visual squad dweeb (he resembles Hustle and Flow costar DJ Qualls, only dorkier), and is nearly a head shorter and seemingly 20 or 25 pounds lighter than Johnson. His wrongness for the part is so complete that he throws you right out of the film…wham. This is easily the equal of John Wayne being cast as Genghis Khan in The Conqueror (1956). It’s not quite as absurd as, let’s say, the dwarf-sized composer Paul Williams (he played a rock-music mogul in Phantom of the Paradise) being cast in the ’70s as N.Y. Jets quarterback Joe Namath, but it’s almost in that realm.

The stumbling block for this fan of Lennon’s music (as well as the general Beatles catalogue, of course) is that Nowhere Boy is too concerned with his domestic parenting issues — i.e., Lennon’s half-supportive but vaguely estranged relationship with mother Julia (Anne Marie Duff) and a somewhat contentious relationship with Aunt Mimi (Kristin Scott Thomas). And the fact that Taylor-Wood seems only dutifully interested in his musical beginnings with the Quarrymen and the young McCartney and George Harrison. 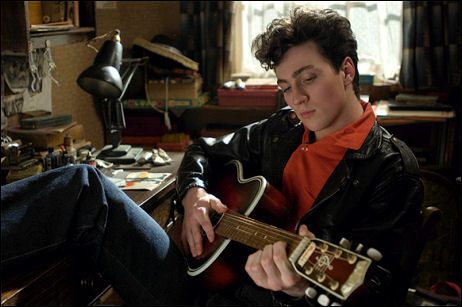 There’s something rote and almost side-issue-ish about the musical scenes. Taylor-Wood shoots them but doesn’t seem to feel them. That’s partly because Nowhere Boy is primarily a hearth-and-home perspective on Lennon’s early life.

I wanted to see a film about the birth of the Beatles, or at least one that would give me an authentic taste of what it was like for Lennon in mid to late ’50s Liverpool, struggling with his personal issues, okay, but mainly about his finding a way out through music and performing. But all Nowhere Boy provides, for the most part, is a somewhat mopey soap opera. Young John may have been emotionally needy deep down, but this doesn’t feel right or true or complete. I didn’t feel Lennon’s rock ‘n’ roll vitality and virility, and certainly not his rage.

Matt Greenhalgh‘s script is based on a memoir called “Imagine This” by Lennon’s half-sister Julia Baird. I understand that this was the key issue of Lennon’s youth, but the film didn’t sell me on this, and in fact seemed to be frittering away its time by focusing on it. Lennon’s anguish was primal enough (“Mother, you had me but I never had you,” etc.) but my reaction all through it was, “Okay, but can we get to the musical stuff, please?”

Nowhere Boy boasts a relatively decent lead performance by Aaron Johnson. He doesn’t overdo the mimicry and keeps his Liverpudlian accent in check. And yet it’s a somewhat overly sensitive, touchy-feely rendering of a rock ‘n’ roll legend who was known, after all, for his nervy, impudent and sometimes caustic manner, at least in his early incarnations. 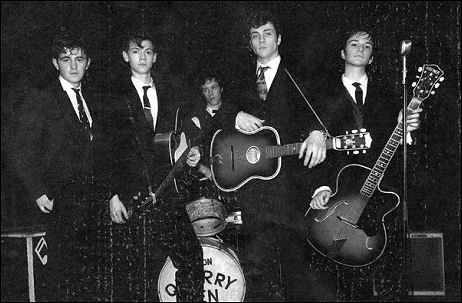 Notice the disparity in size and weight between Aaron Johnson (second from right) and Thomas Sangster (second from left).

I didn’t believe the hurting look in Johnson’s eyes. All those looking-for-love feelings he shows are too much about “acting,” and hurt-puppy-dog expressions don’t blend with the legend of the young Lennon (as passed along by biographies, articles, A Hard Day’s Night etc.) Emotionally troubled young guys tend to get crusty and defensive when there’s hurt inside, and this was certainly Lennon’s deal early on.

And Johnson is needlessly compromised, I feel, by a curious decision on Taylor-Wood’s part to create her own, reality-defying physical version of Lennon. She ignores the fact that he had light brown, honey-colored hair by allowing Johnson to keep his own dark-brown, nearly-jet-black hair. Nor did she have Johnson wear a prosthetic nose — one of the oldest and easiest tricks in the book — in order to replicate Lennon’s distinctive English honker. Where would the harm have been if they’d tried to make Johnson look more like the real McCoy?

Thomas is fine and acceptable as Mimi; ditto Duff as Julia and David Morrissey as Julia’s live-in boyfriend/husband/whatever. I liked the young actress who has a small part as Lennon’s impulsive lust object. (I think I’m talking about Ophelia Lovibond.) And the atmospheric detail is nicely handled, although Lennon/ Johnson seems awfully well dressed (pressed shirts, jacket and tie, fur-collared overcoat) in certain scenes. In every photo I’ve seen of him he’s never spiffy, always in scruffy hand-me-downs. It seems as if Taylor-Wood gave her wardrobe designer too much liberty. 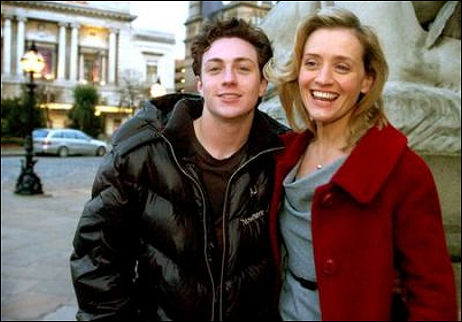 The hair color of Anne Marie Duff, who plays Lennon’s mother Julia, is slightly lighter but fairly close to the honey-brown tint of the real John Lennon’s hair. And yet director Sam Taylor-Wood ignored this and let Johnson keep his nearly black hair for the film.

Sidenote: It sounds as if the trailer-makers have used an audio clip of the real Lennon narrating the opening of the trailer. I could be wrong, but one of the interesting distinctions about Johnson’s performance is that he doesn’t try to imitate Lennon’s voice — he approximates it — but the man speaking in the beginning of the trailer sounds like Lennon himself.