I sat down early Sunday evening inside a spacious, softly lit Culver City cafe and spoke with Frozen River star Melissa Leo. She’s blonde-ish these days (part of a look she’s using for the currently filming Welcome to the Rileys, in which she plays the estranged wife of James Gandolfini) and very thin and…well, looking good, which is to say sexier, healthier-seeming and more spiritually centered than the frazzled trailer-dweller she plays in that three-month-old Sony Classics release. 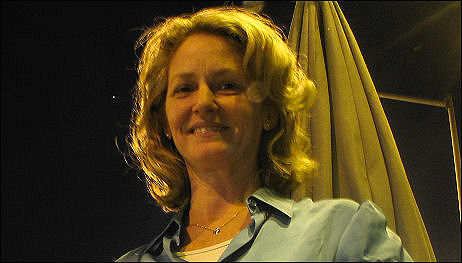 After catching her portrayal of that desperate, financially strapped mom trying to make ends meet by smuggling illegals over the Canadian border, I told myself (as did many others) that Leo is the first hands-down Best Actress contender of ’08. It’s one of those performances that are not so much “acted” as occupied or lived in. A character gripped, turned around and held onto.

And yet Leo is now one of three Best Actress contenders in Sony Classics releases — herself, Anne Hathaway in Rachel Getting Married and Kristin Scott Thomas in I’ve Loved You So Long . The declared policy from SPC co-president Michael Barker is that none of these three will reap a disproportionate share of press ink and/or trade ads, but one can’t help but wonder. Doesn’t the newer movie or performance always seem to get the grease?

Leo certainly seems the most indie-ish of the three. Meaning that she appears to be the most self-sufficient and stand-aloneish by way of being (or seeming) less on the corporately-funded limousine circuit. Plus the earthy intensity and hardscrabble conviction that she puts out every time she stands up and opens her mouth in a film, or shares an opinion about any strong belief over a dinner table. She’s the real deal. 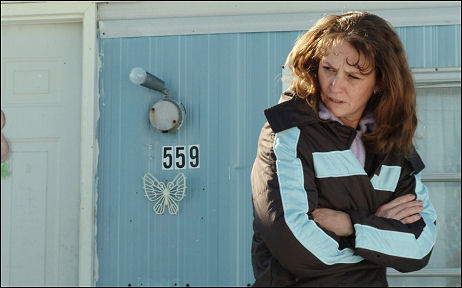 Leo is certainly one of the two or three most gifted and intensely watchable American actresses of a certain age working in movies today. (Along with Meryl Streep and…I don’t know who else to name right now. It’s too hard to decide.) I became convinced of this five years ago after catching her as Benicio del Toro‘s suffering domestic partner in Alejandro Gonzalez Innaritu‘s 21 Grams.

“Look at me, I did it on my own, landed the best role of my lifetime and hit it out of the park,” her face and life and career seem to be saying about the Frozen River deal and the general here-and-now.

A friend suggested last night that Leo is the female Richard Jenkins in the ’08 Oscar race. He half-believes they should actually do interviews together, going out of the circuit as the Ma and Pa Kettle of talented indie-level award campaigners. He’s not being a smart-ass — it’s just that he feels they would get a little more attention this way and stand a better chance of inspiring Academy members to actually pop in those Frozen River and The Visitor DVDs.

This fellow also believes that the presumed and/or expected award-quality performances from Meryl Streep in Doubt, Kate Winslet in Revolutionary Road and The Reader, Angelina Jolie in Changeling, and Cate Blanchett in The Curious Case of Benjamin Button — all big-name actresses with more heavily-bankrolled campaigns behind them — may stand a better chance of being nominated. “Why the hell would that necessarily be?” I argued. “Because it makes Academy members feel better, to vote for venerated brand names?” 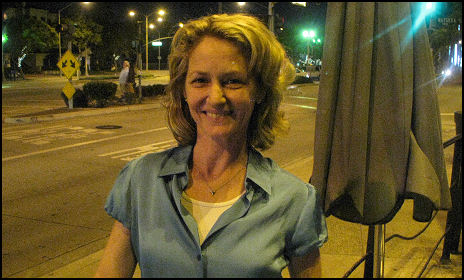 “Well, maybe Leo will win the Spirit Award for Best Actress,” he then said. No…no consolation prize! Leo has been too good in too many other films. She’s too talented and intense and has worked too hard and long and well to be fobbed off. This is her year, her time.

According to her IMDB page Leo has acted in 13 films since completing Frozen River. OKay, so maybe it’s actually ten or twelve or fourteen, but she’s obviously not letting the grass grow.

Anyway, here‘s the mp3. You can hear our discussion pretty well at first, although gradually the music gets louder and then groups of four and six are seated nearby and start in with the yappy-yap-yap, and before you know it Leo and I are leaning forward a bit more in order to hear. And then the yappies start in with the red wine and the giggling, and then laughing uproariously every so often. And then the owners turn up the music even louder, and this time it’s Mick Jagger. The only thing is missing is a trio of guitar-strumming Mexican guys coming up to the table and singing “Por un Amor.”