Less Is So Much More

Joel and Ethan Coen‘s Inside Llewyn Davis, which just let out, is some kind of brilliantly sombre, wonderfully atmospheric, dryly hilarious, pared-down period masterpiece — a time-tunnel visitation to 1961 Greenwich Village that feels so meditatively right and authentic and resonant that I can’t wait to see it again. I read the script about 14 months ago and I still don’t know what it’s really “about.” Well, I do but the Coens sure as shit don’t spell anything out. But I know a profound American art film when I see it. I know what exquisite less-is-more movie backrubs are all about. I know the real take-it-or-leave-it when I experience it. 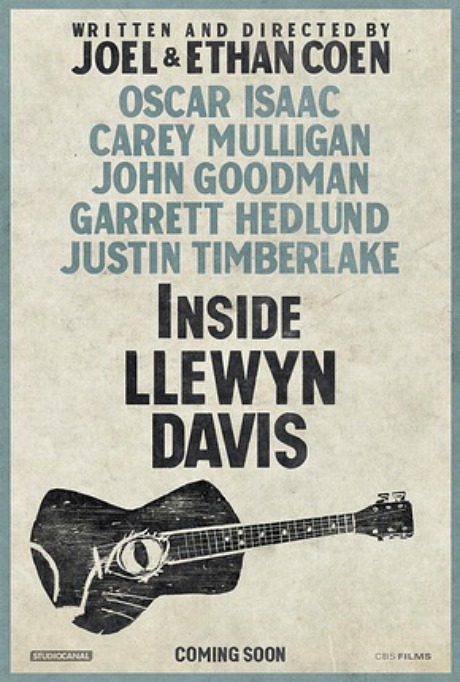 The basic story is about a not-untalented folkie troubadour slacker named Llewyn Davis (Oscar Isaac) who performs well enough but not quite well enough to make it big, or even bigger. Or even work enough to afford his own place. He’s mainly a hanger-on, a deck-shuffler, a stay-in-placer — a generic one-step-forward, two-steps-backward type of guy. Not a complete unknown, but no vision and no spark and no direction home.

The movie is primarily about how Llewyn hangs on and gradually arcs his way from feeling dispirited and semi-despondent to feeling out-and-out despair and on the brink of giving up. But the despair that tugs at him is so delicious it’s like ice cream. And the dry and succinct sensibility that informs the Coen’s direction is so richly realized. And the timing of each scene, the perfect acting, the cutting, the magnificently wintry color scheme…I could go on all night.

I mean, I obviously know what happens and what the faded wintry colors convey and where it all goes but the point, I think, is that Inside Llewyn Davis is not “about” anything except itself. It’s a work of mocking social satire on one level and on another level an extremely sly, austere, sardonic and culturally on-target art pour l’art movie. The Coen’s films have always been less about some kind of precise narrative yield or engaging character turns or what-have-you and more more about (take your pick or choose all) irony, detail, authenticity, perversity, painterly beauty, eccentricity, flair, color, hints, allusions and nothing left to chance.

I have to think about this film some more. By that I mean it’s 10:05 pm and there are two big parties happening and I feel like being social.