Leto In The Lead

The way I see it Dallas Buyers Club‘s Jared Leto is the guy to beat for Best Supporting Actor. Deadline‘s Pete Hammond called it right after the Toronto Film Festival debut screening of Jean-Marc Vallee‘s film — in pop-through terms Leto’s Rayon, a compassionate if self-destructive draq queen who helps Matthew McConaughey‘s Ron Woodruff distribute non-FDA-approved drugs for fighting HIV, is a strong echo of Chris Sarandon‘s Leon in Dog Day Afternoon (’75) — a performance that was nominated for Best Supporting Actor. 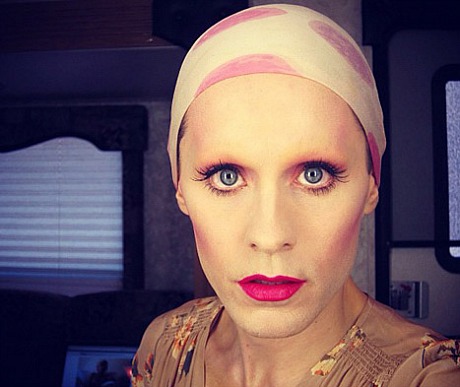 This situation could change once everyone sees Jonah Hill‘s supporting performance in Wolf of Wall Street, but Martin Scorsese‘s film won’t start to be screened until…well, as soon as possible, I suspect. Early December?

I updated my Gold Derby predictions today, but things are kind of at a standstill right now. I thought 2013 was supposed to be banner year and in the minds of more than a few the likeliest Best Picture winner is Gravity? It’s interesting that the most realistic space movie since 2001, basically a struggling-to-survive drama with a single actor (Sandra Bullock) carrying the show, deals the same basic cards as the much more interesting All Is Lost, even though no one seems to be even considering that as Best Picture material.

Riding right alongside, of course, is Steve McQueen‘s 12 Years A Slave, which is the hands-down champ…oh, God, I can’t do this again. I’m getting sick of tapping out the same scenario over and over. Becket, I’m bored.