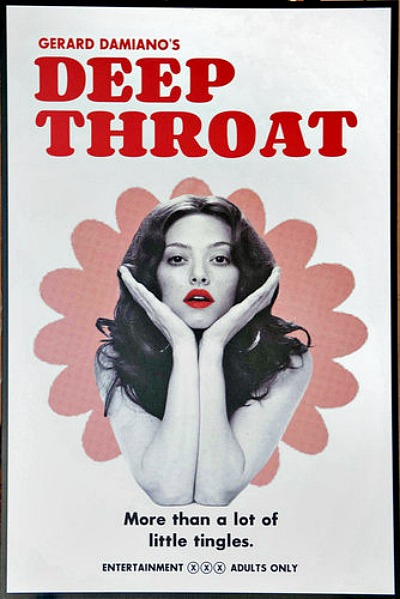 All Itzkoff manages to say is that Lovelace “played a woman who learns that her clitoris is in her throat.”

He also says “there is comedy…in the film’s fastidious re-creations” of Lovelace’s python-like feat. He quotes actor Adam Brody, who plays Deep Throat co-star Harry Reems, saying that “those sex scenes with Ms. Seyfried were ‘by far the lightest, silliest stuff in the movie.'”

The other Linda Lovelace movie, Matthew Wilder‘s Inferno: A Linda Lovelace Story, won’t begin shooting until March, meaning that in all likelihood it’ll be eating Lovelace‘s dust. That in itself suggests that Wilder won’t be shooting his sex scenes in a light or silly vein, if only to avoid aping Epstein and Friedman. Lovelace producer Heidi Jo Markel, a former producer of Inferno, tells Itzkoff that Wilder’s script is “good” but “dark and oppressive.”

Itzkoff gets a tad more explicit at the end of the piece when he dryly describes the beginning of a scene in which Seyfriend/Lovelace orally pleasures Franco/Hefner in the balcony of Glendale’s Alex Theatre. Sorry again, but that is the gist of Itzkoff’s last paragraph. A N.Y. Times first?

Who, honestly, is going to have the stones to watch two Linda Lovelace dramas? One will be grueling enough, I suspect.