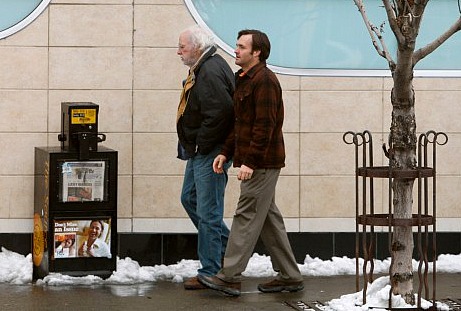 “If you’ve read Hollywood Elsewhere on occasion since last May you know I’m not the biggest fan of the subject matter of Nebraska. I know that the dweebs will say it’s thick and plebian of me to respond as much to subject matter as directorial finesse and underlying theme and whatnot, but I’ve been starting to process films this way more and more. It’s not just the singer — it’s also the song. (Sometimes the song is almost the whole damn thing.) And Nebraska is one grim (if artful), sad (but poignant), losing-your-mind-and-going-down-the-drain-against-a-flat-barren-hellscape song. Okay, with kindness at the end when Forte buys the truck. And with an obese girlfriend. And with a bunch of old folks and fat guys and schlubs sitting around taverns and getting half-bombed who seem pretty wan and lifeless to me, no offense. And those fat, low-rent brothers? I hated those guys. Their faces alone were enough to make me wince.

“I’ve said all along that your Nebraska chops are, as always, assured and refined — the overall economy and precision plus the performances and Phedon Papamichael‘s mesmerizing b & w photography. Plus June Squibb‘s big angry rant at the in-laws in the backyard (love that scene!).

“You may know about my conviction that Dern’s Woody performance is basically a large supporting thing. I’m not sure if Nebraska has any leads — Will Forte should be but there’s something about his performance that isn’t quite lead-y, although he is the “lead.” And you may know that I’ve been urging that Dern and Paramount go for supporting because he’ll absolutely own it and win if he does. If Dern gets nominated for Best Actor, great (I love the guy). But as things stand now I’m not even sure if he’ll be nominated for Best Actor, which is what he’s going for. Robert Redford is the guy with the dominant gold-watch, still-humping-it-in-his-70s credentials, and I’m thinking that the Academy may not be willing to go for two gold-watch guys. At the very least they’ll vote for Redford before they’ll vote for Dern. I hope they nominate him but I have honest doubts. 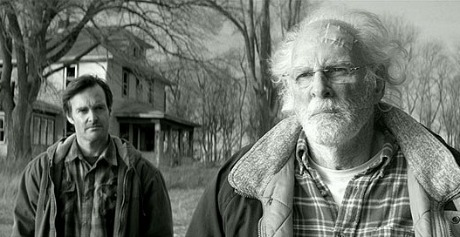 “I despise what I see as the great emptiness of life among the sleepy rurals in the sticks. Or anywhere you find people zoning out. Life is so rich and feasty and eye-opening if you’re in the right places and hanging with the right people (artists, achievers, long-distance bike riders, happy families, crazy writers, hikers, architects, political activists, altruists, sailors, watchmakers), and these Nebraska guys are just nodding out with those dead-to-the-world expressions. The older supporting folks in your film (obviously with the exception of Dern and Squibb and the woman who plays the wife of Dern’s brother, whom I liked, plus that pretty older woman at the end) are just wax figures.

“Which you are obviously pointing to with a sly satirical edge. I know that you see this as humorous because you’re from those parts (you said in a just-posted Rotten Tomatoes interview it has “a pretty Nebraskan, deadpan sense of humor that I liked a lot”) but I don’t see it as even remotely humorous, deadpan or dry or otherwise. The only scene that I really like is when Squibb tells some in-laws to go fuck themselves. I’ve sat in those funeral-parlor living rooms as a kid on Thanksgiving and Christmas day with those all-but-spiritually-dead elders, and I remember those moments like my worst fucking nightmares. If my occasionally robust life has been about one thing it’s been about not becoming one of those awful living corpses.

“And I went through the whole Will Forte-deals-with-eccentric-Woody thing with my own dad (not often but often enough), and it wasn’t remotely endearing or gently touching or any of that. It happened between roughly ’05 until my father’s death in June 2008, and it got worse and worse and worse. It was hellish. The grumpiness, the rage, the rudeness, the mad and reckless driving that almost got me killed once, the falling down, the stitches in the bloody foreheads and the broken teeth…all of it.

“My dad (an advertising guy who worked until the late ’80s but who peaked during the Mad Men era) hated what was happening to him. Getting really old is about increasing amounts of humiliation, plain and simple, and he felt almost nothing but anger about it. The process, after all, is basically nature talking you out of the idea of living. Every day it says to you “this isn’t so hot any more, is it? You can’t do this, you can’t do that and you’re wearing adult diapers now and smelling your own urine half the time…and it’s going to get worse and worse. So if, you know, if you want to think about giving up and checking out while there’s still some portion of your mind that’s functioning or at least capable or remembering happier times…well, it’s up to you.” 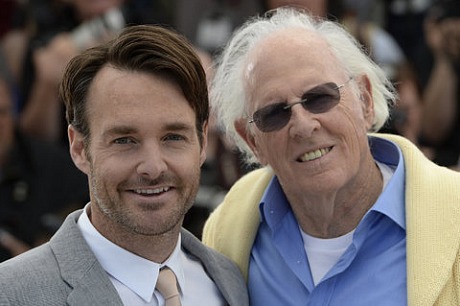 “So I’ve been there and smelled the piss and dealt with the slow, dull, growing horror of approaching death, and it’s a repellent thing to go through for the old person first and foremost, but also a very sad and difficult thing for children and in-laws and care-givers. So forgive me if I didn’t go into a warm loving place by what Dern’s Woody is like and what he goes through in your film. It hit too close to home, and if you ask me Bob Nelson‘s script just showed the parts that were dramatically palatable or tolerable.

“Honestly? I never liked my father when I was a kid. He was a refined and responsible guy who stood up and paid the bills and paid for my limited college education and who eventually went into AA and mellowed down after that, but he was still an alcoholic prick from the time I was a little kid until I graduated from high school. But then he turned really snarly and mean in his 80s, and I just shut down. All those foul currents from my early childhood and teen years came back. There was no way I was going to buy him a fucking truck or anything like that, although I gave him tons of DVDs and screeners right to the end, and I always got him a cigarette when he asked for one — he took up smoking again during his last couple of years. What the hell, right?

“Obviously you’re a serious, high-end filmmaker and craftsman. I’ve been in your corner before (especially with Election and Sideways and The Descendants) and I will be again. Nebraska is obviously a serious, well-made film. It just wasn’t my cup of tea because of the death aspects. The resignation, the flatness, the barren trees. But I respect it and get why others really like it. They’re not wrong. I just can’t go there. But I love Mr. Dern and want to see him be nominated. And I’m going to try to speak with him soon — I loved shooting the shit with him during that round-table discussion in Cannes.”