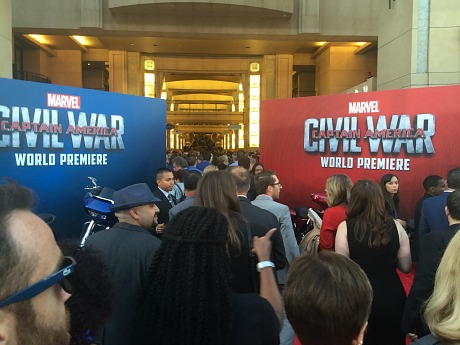 This movie runs around the track over and over like the ’91 Terminator, sometimes going into a sprint and sometimes slowing down to a jog but always running, and it makes you run with it, and after the Berlin brawl you just start to feel that gathering ache in your thighs and calves and in your wheezing lungs, and so you’re looking at your watch (I first checked it right after the Berlin airport sequence, which kicks in around the 80 or 85 minute mark) and going, “Oh my God…this goes on for another 55 to 60 minutes?”

The fucking thing lasts 147 minutes, right? I would have had fewer bowling pins, fewer plot tangents and a running time of two hours max. Over all I’m giving it a B (not a B-plus but a B) but it’s not an A because any movie that induces as much fatigue as this one does over the last 55 to 60 minutes is doing something a little bit wrong.

P.S. Chadwick Boseman‘s Black Panther is a welcome addition to the team or the mob or whatever you want to call the Marvelosos. He looks cool with the suit and the claws and whatnot, and Boseman is appropriately solemn and straight as T’Challa (i.e., prince of Wakanda, an African nation, who’s allied with Stark) and isn’t fooling around. What’s his special skill aside from the claws? He flies around and shit but I didn’t notice any standout abilities.

P.S. You loved the SpiderMan kid (i.e., Tom Holland)? He’s fine, but how tall is he…4′ 11″? Is he over five feet? How many fucking SpiderMans are we going to have to meet and accept and develop a crush on during our limited time on this planet?

P.S. The Winter Soldier (whatsisname, scowlface, fuckface…Sebastian Stan) killed [redacted] parents back in 1991 but his mind was being controlled by Russian blackheart fucks so he didn’t really “do” it? Well, he did it but he wasn’t really in control (not in his heart) so it didn’t/doesn’t count?

Yes, it’s running at 100% on Rotten Tomatoes but if you actually read the reviews you’ll detect what’s really going on here. “Completely overstuffed…shameless fan service bits…sure to satisfy the devotees.” Get it?