In yesterday’s (8.31) L.A. Times, there were two wise and well-phrased thoughts — one about cutting, another about scoring — from What Just Happened? director Barry Levinson, as told to critic Michael Sragow. 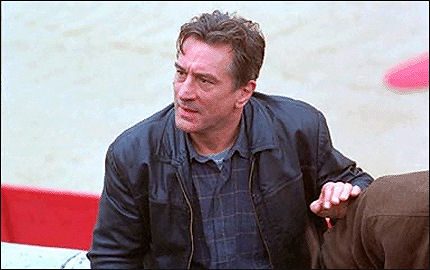 Quote #1: “In my mind, I have a scheme about how a scene is supposed to work and what’s needed in each scene. But then you hope that a scene doesn’t suddenly come apart in the editing room so that you’re fighting for its life. Sometimes the scene in front of it is affecting it in some way. And there are all these little surprises that come about. Sometimes you find holding back on some moment makes it all the stronger. It’s extraordinary how much impact a particular cut from one shot to another can have. The mathematics of, ‘We need to extend this shot for six more frames,’ and suddenly with those six frames I feel something there, that moment, and that’s all there is — it’s just extraordinary.”

Quote #2: “Music has a huge effect. You have to find the voice of the music. You don’t want to push the movie emotionally. You have to allow it to breathe on its own.”

What Just Happened?, an inside-Hollywood drama based on Art Linson‘s sardonic roman a clef that was partly about the difficult making of The Edge, the trying-really-hard-not-to-get eaten-by-an-Alaskan-grizzly-bear movie with Anthony Hopkins and Alec Baldwin that came out ten years ago.

Levinson shot it a few months ago after toning up the the script. I’ve read the untrammelled Linson version. It’s not The Cherry Orchard but it’s a knowing, real-feeling piece about a barely-holding-it-together producer, in the way that Robert Redford and Michael Ritchie‘s The Candidate was a clever take on early ’70s politics. It will open sometime in ’08.

A slimmed-down, stunningly youth-ified Robert DeNiro (he was looking like a turn-of-the-century Russian wheat farmer for a while there — here he looks like he did in Midnight Run) plays the Linson character. Bruce Willis and Sean Penn play themselves; the costars include Stanley Tucci, John Turturro, Kristen Stewart, Robin Wright Penn and Catherine Keener.