LexG drove out to the deepest West Valley the other day to confront Lars Von Trier‘s Melancholia ((Magnolia, 11.11) during its ultra-low-profile, Academy-qualifying L.A. engagement. I sat on his review for two or three days but here it finally is. He somehow manages to actually write about the film without going into his “woe is me, I needs me some white wimmin’ and if I don’t get what I need I’m gonna kill myself” routine. Very commendable. 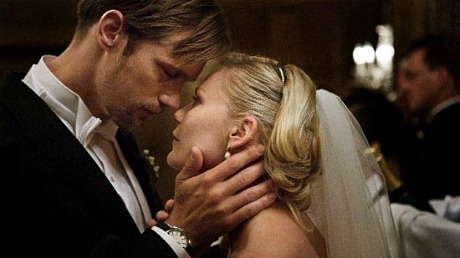 “Functioning as almost a companion piece to his more outrageous Antichrist, Lars von Trier’s Melancholia is an emotionally audacious movie of two halves. The first depicts the encroaching mental breakdown of depressed bride Justine (Kirsten Dunst) on a notably unhappy wedding day as a distant planet called Melancholia approaches Earth. The second half skips ahead as the Melancholia continues its ominous approach we witness the doomed last days of now-thoroughly-shut-down Justine along with her more functional but also emotionally ragged sister Claire (Charlotte Gainsbourg) and Claire’s husband (Kiefer Sutherland) and young son (Cameron Spurr)

“Dunst and Gainsbourg deliver distinct, shattering characterizations, and that give-and-take contrast extends to the subtly audacious narrative as well. The two-part structure allows Von Trier to revisit and mirror certain motifs, images, and themes from the internalized Justine section (depicting mental anguish) again in the more sci-fi-ish, suspenseful and visual Claire segment, where the end of the world has become an externalized physical threat.

“It’s an auteurist triumph, bringing full circle the more pulpish elements of Von Trier’s earlier work with the emotional rawness of Breaking the Waves with just a little of the formal experimentation of his dogme years, but now with the impeccable visual panache of Antichrist.

“Dunst is the real deal here, functioning as LVT’s muse in a story that’s in a way almost first and foremost about the director’s own notorious mindset and provocations; Dunst has gone to the dark side before, most impressively in John Stockwell‘s crazy/beautiful, but this is a whole ‘nother level — an indelible portrait of complete dejection that’s easily the intensity-equal of Natalie Portman in Black Swan. 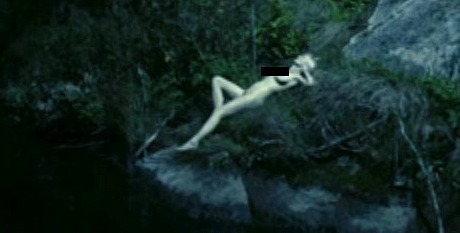 “Dunst is so good, in fact, it’s almost getting lost in the shuffle how raw Charlotte Gainsbourg is — the two performances, again, complement each other perfectly.

“Supporting cast is a veritable if unsurprising roll call of Von Trier-worthy maniacs, from Udo Kier to Charlotte Rampling to Jesper Christensen to John Hurt to the father-and-son Skarsgaards (Stellan and Alexander), but definitely worth noting is how easily Sutherland, perhaps taking a cue from his awesome old man’s roving-artist ’70s work, makes the transition to European Art Cinema in a decidedly un-Jack Bauer role.

“I’m not entirely sure where Brady Corbet managed to earn his ‘work with insane provocative overseas auteurs club’ card after Funny Games and this, but he pops up here doing his Rich Man‘s Kyle Gallner routine in the first half, wherein the cynical familial, corporate, and romantic relationships represent either a reason for, or a wonderfully indulgent justification of, Justine/Von Trier’s nihilistic despair.

“Others have cited a certain shared series of cinematic and thematic interest that recur between Melancholia, Another Earth and Tree of Life, but for my money this is the strongest of the bunch, the one that best melds the otherworldly implications of a giant perilous universe with the interpersonal breakdowns of its characters. But when they write the definitive film-summation book on 2011, lumping these three (and probable others to come) together might not be a bad place to start, this year almost starting to look like a more cosmic extension of last year’s dark ruminations on mortality (Enter the Void, Inception, Black Swan, Hereafter, etc etc.)

“In a nutshell: highly recommended.”