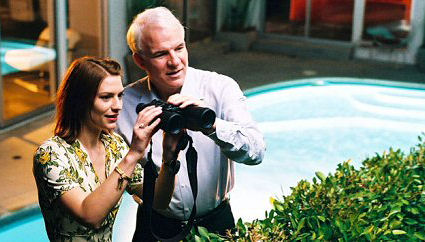 “Steve Martin the author is well served by Steve Martin the multihyphenate in this delicately nuanced 2005 dramedy,” Leydon writes…bullshit! And that goes double for Leydon’s claim that it’s “a smartly reconstituted yet surpris- ingly faithful adaptation” of Martin’s novella.

I could rephrase what I wrote about Shopgirl during the 2005 Toronto Film Festival , but it’s easier to just paste it:

“Shopgirl is said to be based on Steve Martin’s dry, somewhat downbeat novella of the same name. It’s not, actually.

“Someone at Disney said, ‘We can’t really do Steve’s book…we have to settle for taking the basic story line and then broadening it out and adding extra moods and colors and beefing up the Jason Schwartzman character so we can get the kids to come see it.”

“And then the director, Anand Tucker, decided to add syrupy violin music and splashes of artsy-fartsy digital photography here and there, and the end result is simultaneously too much and not enough. It seems overly fussed with, as if portions of it were re-shot and re-edited. A lot of it feels awkwardly stitched together and tonally lumpy.

“If everyone had said, ‘Let’s make a little movie that’s really based on Steve’s book for next to nothing and worry about pocketing the big paychecks on the next job,’ it might have worked…maybe.

“It’s basically the story of Mirabelle (Claire Danes), a would-be artist who’s slowly dying of boredom selling gloves at the Beverly Hills branch of Saks Fifth Avenue (i.e., the one in which Winona Ryder was busted for shoplifting). For what it’s worth, Danes gives the film’s best performance by far…but then she’s always good.

“The movie spends 15 or 20 minutes setting up her relationship with a poor amplifier technician named Jeremy (Schwartzman) before Ray Porter (Martin) comes into the store and sweeps Mirabelle off her feet with some genteel moves that include lavishing her with nice gifts and paying off her college loan.

“You know Danes isn’t going to last with Martin and will end up with Schwartzman, etc., but I wasn’t prepared for the depressing fact that Martin is looking older and puffier than I’d prefer. I don’t know if it’s cosmetic surgery or whatever, but he should try and go back to looking precisely the way he did when he made All of Me, or at least The Spanish Prisoner.

“And it’s understandable that Martin’s Ray Porter doesn’t say any sharp zingy lines because he’s this slightly dull guy from Seattle, but it would have been cool regardless if he had been written as a Steve Martin-ish wise-ass.”