Yesterday on Salon Joan Walsh urged reporters and commentators to “stop calling Rand Paul a ‘libertarian.’ Stop it right now. ‘I’m not advocating everyone go out and run around with no clothes on and smoke pot,’ Paul said in 2013. ‘I’m not a libertarian. I’m a libertarian Republican. I’m a constitutional conservative.’ 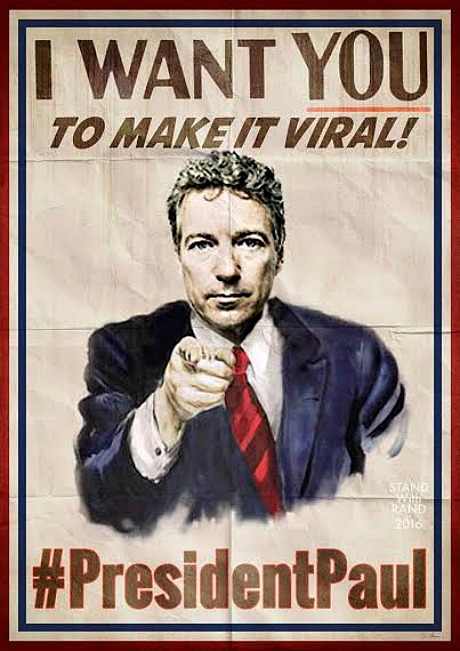 “See, 2016 reporters? He said it himself. He’s not a libertarian. Why keep the myth alive in tedious, insight-free campaign coverage?

“Think Progress’s Judd Legum runs exhaustively through the record, but here are a few highlights. First of all, he’s staunchly anti-choice, supporting the ‘Life begins at Conception Act’ and pretty much every other piece of anti-abortion legislation that’s come before him. He’s got a 100 percent rating from the National Right to Life Committee.

“And while Paul used to sound vaguely live-and-let-live when it came to gay marriage, he has toughened his rhetoric. He now says the idea of a marriage between a same-sex couples ‘offends myself and a lot of people,’ and he’s joined Rick Santorum in suggesting it may lead to interspecies intimacy. We learned last week that he doesn’t even believe in the concept of gay rights, telling an interviewer in 2013, ‘I really don’t believe in rights based on your behavior.’

“Where libertarians tend to support liberalizing immigration laws and promoting more open borders, Paul has voted against any liberalization of U.S. immigration policy. He even cosponsored a bill with Sen. David Vitter to end citizenship rights for the children of foreigners born on this soil, when he first got to the Senate. ‘Citizenship is a privilege,’ Paul said at the time, ‘and only those who respect our immigration laws should be allowed to enjoy its benefits.'”