“I was 17 in the summer of ’76, when Lifeguard opened,” Hope Springs director David Frankel wrote in a 5.4 N.Y. Times summer movies article. “If you weren’t 17 yourself then and bored and oversexed, you probably didn’t see it, and I can’t tell you to go running to iTunes now to download it. It’s there, but barely. Not even one customer review.

For whatever reason Amazon is charging ridiculous prices for the Lifeguard DVD, only two of which are left in stock

“Surprisingly it’s PG, because if you asked me, I’d say it was all about sex,” Frankel says. “About growing up and accepting adulthood too, but mostly about sex. There’s a scene on iTunes that features the stars, a rakish Sam Elliott seducing the busting-out-of-her-bikini Kathleen Quinlan, and it’s barely watchable.”
(Here’s the scene in which Elliott and Quinlan first meet.)

“But still I remember Lifeguard all these years later, and that counts for something, doesn’t it? Isn’t that what art is, really? A work that makes you see the world differently, that answers questions you didn’t know you had, that perfectly captures a time and a place, that inspires you?

“It was America’s bicentennial that summer. New York, where I went to high school, was invaded by tall ships and paralyzing heat. My buddy Eric and I were traveling the junior tennis circuit in his father’s Buick, passing through towns like Poughkeepsie and Albany. We lost early most weeks and filled the time until the next tournament with bowling and movies.

“Lifeguard was one of those movies. Elliott plays Rick Carlson, an aging (30!) lifeguard in Los Angeles who knows there’s more to life than beach parties and one-night stands with teenage girls and stewardesses but can’t bring himself to take a real job at a Porsche dealer even if that’s the only way to win the heart of his old high school flame, the very, very, very pretty Anne Archer.

“So where was the sex? Well, Sam Elliott was so damn good-looking in that sleazy, ’70s bathing-trunks-and-mustache way (predating Baywatch and Magnum, P.I.) that he could pretty much charm the bra and panties off of anybody. 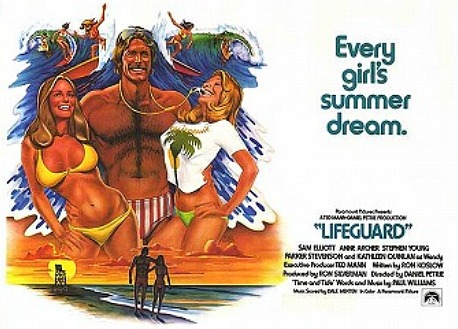 “But there was also something wildly sexy about Los Angeles, the city. Somehow I knew it held the key to my future, and Lifeguard was the sales pitch: sunsets and muscle cars and beach houses and lazy sex on unmade beds.

“Talk about inspiration. Six years later I was living out there in a roach-infested, sun-drenched apartment on Pico, driving a ’69 Plymouth Satellite to the beach on weekends, hoping to meet girls, dreaming of a Hollywood career. The only thing I didn’t have was the mustache.

“The shambling style of the movie was typical ’70s: rough around the edges. The director, Daniel Petrie, won an Emmy that year for his elegant TV movie Eleanor and Franklin, but Lifeguard had a relaxed, unpolished quality that made it feel very real, a peek at adulthood if you didn’t follow all the rules.

“The screenplay by Ron Koslow is full of clunkers but also gems like the opening line: ‘The only place jogging is going to get you is right back where you started,’ which seemed profound to my unformed teenage brain.

“Most important, Lifeguard is about making choices. That’s what the best movies are always about, and that’s what I remember most: the horror of realizing at 30 that your best years may be behind you, and that only drudgery and self-hatred lie ahead.

“Sitting there in my tennis shorts in a multiplex in Poughkeepsie, that sure motivated me. In a strange, popcorny, cliche-ridden, summer-movie kind of way you could say that Lifeguard saved my life.”

I’ve thought and thought about it, and can’t think of a single “summer movie” that has really touched me or transformed or lifted me up, over and out. For me the best movies have always been and always will be fall or holiday movies. To hell with rote escapism by way of leisurely yoks and pleasure cones and suntan oil and brainlessness.