“Now you listen to me, I’m an advertising man, not a red herring….and I can hear colors.”

Having written three or four times about Cary Grant’s therapueutic LSD experiments in the late ’50s and early ’60s, I find it hilarious…okay, amusing and intriguing…that James Lapine, Tom Kitt and Michael Korie are about to present Flying Over Sunset, a stage musical about Cary Grant, Claire Booth Luce and Aldous Huxley dropping acid together inside a Malibu home in 1957. Previews will begin at Lincoln Center’s Vivian Beaumont on 3.12; the show opens on 4.16.

Grant will be played by Tony Yazbeck (a half reasonable look-alike), Luce by Carmen Cusack and Huxley by Harry Hadden-Paton.

Problem #1: In the below video Yazbeck is wearing an undercut with the usual whitewalls — i.e., super-short hair around the ears that exposes scalp. Cary Grant never, ever wore an undercut. His thick black hair was always cut with a little length around the ears. After casting Yazbeck why didn’t the producers tell him to grow his hair out a bit? No one is expecting Yazbeck to look or sound exactly like Grant (his voice is way too thin and high-pitched to even attempt an imitation) but why alienate viewers by contending that Grant wore a Hitler Youth?

Problem #2: Yazbeck looks like a handsome cross between Oscar Isaac and a dapper Palestinian. (Yazbeck is “a common family name and surname of Palestanian origin,” according to Wikipedia.) Am I allowed to sat that Yazbeck’s nose is clearly larger than Grant’s? This is another example of “woke” casting. Are you telling me that if there was a new musical about, say, a Palestinian surgeon that producers would hire a guy who looks and sound typically English? Not in this day and age — they’d find an actor who looks Middle Easternish. So why didn’t Lapine hire an actor who looks like he might’ve actually been born to Anglo Saxon parents in early 20th Century Britain?

Problem #3: The “trip” in the show happens in 1957, and yet Grant’s first trip happened under professional supervision in 1958. (This, at least, is what’s reported in “Cary in the Sky With Diamonds,” a 2010 Vanity Fair article by Judy Balaban and Cari Beauchamp.) Obviously a minor detail, but on the other hand why fudge it? 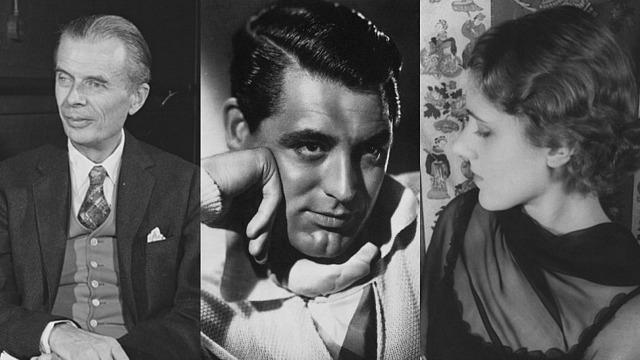 “The current received wisdom is that Cary Grant was the ultimate Captain Trips — the guy who inspired Timothy Leary to look into LSD, and in so doing became a prime influencer and seminal counter-culture figure. Not actually but, you know, in a roundabout, cosmic-linkage, one-thing-leads-to-the-next-thing way.

“Turn off your mind, relax and float upstream…it is not dying, it is being”…that’s Cary! I might be pushing the connection a bit, but if you’ve ever been “experienced”, you wouldn’t be far off the mark to regard Cary Grant as your brother, your father…the guy holding your hand.

A Xan Brooks Guardian piece about Mark Kidel‘s Becoming Cary Grant, which will screen at the forthcoming Cannes Film Festival, more or less makes that claim.

I riffed about this on May 4th but the Brooks article got me going again.

“Like all documentary makers, we started out looking at the construction of Cary Grant,” producer Nick Ware tells Brooks. “But we ended up deconstructing him through the LSD sessions.”

“[Grant] claimed he was saved by LSD,” explains Kidel, the film’s director. “You have to remember that Cary was a private man. He rarely gave interviews. And yet, after taking acid, he personally contacted Good Housekeeping magazine and said: ‘I want to tell the world about this. It has changed my life. Everyone’s got to take it.’

“I’ve also heard that Timothy Leary read this interview, or was told about it, and that his own interest in acid was essentially sparked by Cary Grant.”

In other words, the guy who launched 100,000 voyages across the cosmic sea and did more to transform the spiritual template of American culture than any other factor was not Leary, not Richard Alpert, not Alan Watts, not Ken Kesey or Augustus Owsley Stanley, not Allen Ginsberg, not the Beatles and not Jerry Garcia but Cary fucking Grant.

From “Nirvana Flow-Through“: “I would always describe what LSD did to my brain as a kind of blissful washover that freed me from everything I’d learned in school and thereby delivered radiant truths. The usual mental associations and thought patterns were rescrambled by my senses turning all tingly and Technicolored — an elevator-in-the-brain-hotel sensation leading to heightened sensitivity. Which led to the opening of Dr. Huxley‘s doors of perception and the gates of prana.”

Selected responses to “Tripping in Hollywood,” posted on 7.2.10:

“No, Mother, I have not been drinking. No, no…these two men, they put a tab of LSD on my tongue. No, they didn’t give me a chaser.”

“That’s funny, that man’s seein’ dragons where there ain’t no dragons.”

“If you fellows can’t whip the Baba Ram Dass‘s of this world without asking girls like her to turn on with them and probably never come back, perhaps you should learn to lose a few cold wars!”