Like all people of any standards, I too was disgusted by the sleazy gotcha questions thrown last night at Barack Obama by ABC’s Charles Gibson and George Stephanopolous. They asked the kind of questions that might be of interest to regular readers of the Globe or the Enquirer, or people who don’t even do that and watch only television. Gibson and Stuffin’ Envelopes were wallowing, lowballing, dragging things down. 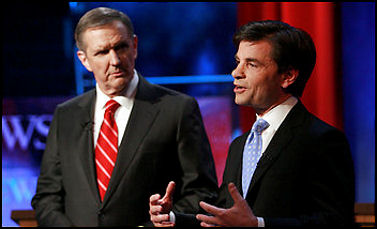 Last night’s debate “was another step downward for network news,” wrote Washington Post columnist Tom Shales. “In particular ABC News, which hosted the debate from Philadelphia and whose usually dependable anchors, Charlie Gibson and George Stephanopoulos, turned in shoddy, despicable performances.
“For the first 52 minutes of the two-hour, commercial-crammed show, Gibson and Stephanopoulos dwelled entirely on specious and gossipy trivia that already has been hashed and rehashed, in the hope of getting the candidates to claw at one another over disputes that are no longer news. Some were barely news to begin with.
“The fact is, cable networks CNN and MSNBC both did better jobs with earlier candidate debates. Also, neither of those cable networks, if memory serves, rushed to a commercial break just five minutes into the proceedings, after giving each candidate a tiny, token moment to make an opening statement. Cable news is indeed taking over from network news, and merely by being competent.”
Clinton was scummy also, continuing to say over and over, “I’m only raising issues that the scumbag Republicans are going to raise, and if Senator Obama can’t cope with these questions any better than he has tonight, you would probably be better off with me as the Democratic candidate.” What a loathsome rationale.
I also emphatically agree with this Will Bunch column from this morning’s Philadelphia Daily News.
That said, I agree that Obama has to spunk up and stop deflecting so much and show a little hellfire and brimstone. His cautious manner is starting to get on my nerves a bit. His genteel refusals to mix it up with Clinton and give her a taste of her own medicine are not what I want to see him do. Michelle, his wife, has lately shown more spit and gusto when she answers questions.