Even By Standards of Silent-Film Era, The Lodger Had Problems

Last night I saw Alfred Hitchcock‘s The Lodger (’27), a vaguely kinky, London-based parlor drama about the terror caused by a Jack The Ripper-type killer, called “The Avenger,” who mysteriously murders attractive blondes on Tuesday evenings. (We’re not told if he’s a stabber or a strangler — maybe he just eyeballs his victims and they drop dead on the spot?) Suspicions quickly surface that a recent arrival at a London boarding house — a tall, good-looking but oddly behaving fellow (Ivor Novello) — may be the killer. Hitch encourages you to weigh this possibility for a good 75% of the film until revealing that Novello is just a queer duck who’s looking to find the man who killed his sister. Novello’s innocence is first hinted at when Daisy (June Tripp), the daughter of the boarding-house owners as well as a model, begins to feel affection and attraction for him, which understandably infuriates her much-older detective boyfriend (played by Malcolm Keen, who was nudging 40 during filming but looked closer to 45 if not 50) and adds to…well, the uncertainty factor, I suppose. 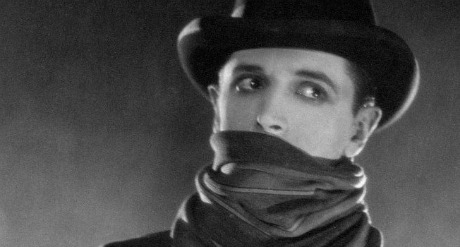 The Lodger was the first Hitchcock film about an innocent man wrongly accused of a crime. It was also Hitch’s first commercial success (it pretty much launched his career) and was also the first film in which he performed a walk-on. (He’s seen from the rear during a scene in which the presses of a major newspaper are printing news of The Avenger’s latest killing.) But this is a rather stiff and primitive little film — more “interesting” than good. Portions are nicely framed and focused, and yes, Hitchcock manages to implant a notion that for certain wackos there’s a kind of erotic charge that accompanies the murder of pretty girls. But he was only 27 during filming with only two or three previous films under his belt, and he just didn’t have enough knowledge or polish at this stage in his life. Not enough, certainly, to satisfy a guy like me watching The Lodger 88 years hence.

At best The Lodger deserves a pat on the back and a suggestion that the young director should keep trying. The Hitchcock who directed the ’34 version of The Man Who Knew Too Much, 1935’s The 39 Steps and 1938’s The Lady Vanishes hadn’t yet come into being. On top of which The Lodger over-uses the boarding house set. Scene after scene after scene happens in the downstairs parlor or in Novello’s room, and the milieu starts to feel more and more stuffy and constipated. (Hitchcock must have been working with a nickle-and-dime budget.) But the biggest shocker is that Hitchcock completely avoids showing the real killer, whose climactic capture and arrest happens off-screen and which we only learn about through a title card. The Lodger would have been much, much more effective if the audience had been introduced to the actual “Avenger” under a fake guise, and then finally discover who he is at the finale as Novello is cleared.