An Access Hollywood piece set to air this evening reportedly quotes Lindsay Lohan‘s manager-mom Dina as saying that the wording in the letter sent to her daughter last week (i.e., the one warning Lindsay to cool it on the partying and missing work or else) by Morgan Creek honcho James Robinson was “way out of line” and “ridiculous.” She reportedly added, “Maybe [Robinson] has personal issues with whomever and it came out with my child. I don’t know him. I can’t judge him. I don’t think it was a smart thing to do to a young girl.” 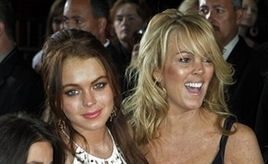 Speaking as a parent, this tells me three things are probably in place. One, Dina is dug into the role of being her daughter’s friend and supporter as opposed to being her parent, and this mindset doesn’t allow for dealing with her daughter’s issues. Two, she’s probably some kind of seminal laissez-faire provocateur as far as her daughter’s past nocturnal proclivities are concerned. And three, she’s a present-tense enabler of same. When (I’m not even saying “if”) Lindsay winds up with the inevitable substance-abuse issues and goes into rehab and all that, there will probably be people other than her mom who will provide the right kind of counsel and support. I mean, look at Dina’s photo above (she’s the blonde on the right). Consider that smile on her face. She’s obviously a hottie who’s obviously open to glamour and lusciousness and sparkling encounters.