You have to hike through 15 paragraphs in David Halbfinger‘s 1.17 N.Y. Times profile of producer Michael London and his production company, Groundswell Prods., before you arrive at paragraph #16 and the reason why the piece is running at the start of Sundance ’08 — i.e., because London has three films showing here. 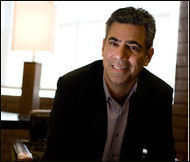 London set up Groundswell in 2006 with $55 million from two sets of investors, the article states. He “started small with three movies, each costing less than $10 million. In a coup, all three are being shown at Sundance.” And in a follow-up coup, the N.Y. Times is giving London and his slate a grand promotional boost. And here I am tagging along.
London’s topliner is The Mysteries of Pittsburgh, a drama looking for a distributor that’s based upon the Michael Chabon novel, and starring Sienna Miller. (Remember her “shitsburgh” remark, which she said during filming? I’ve always loved her for that. A very Tallulah Bankhead thing to say, and bravo.) Peter Sarsgaard and Nick Nolte are the costars. The director is Rawson Marshall Thurber.
The other two are The Visitor with Richard Jenkins (the FBI agent who ate a chicken spiked with LSD in Flirting With Disaster), and Noam Murro√É¬¢√¢‚Äö¬¨√¢‚Äû¬¢s Smart People, a comedy “not too unlike The Family Stone, says Halbfinger. Sarah Jessica Parker, Dennis Quaid, Thomas Haden Church and Ellen Page costar. 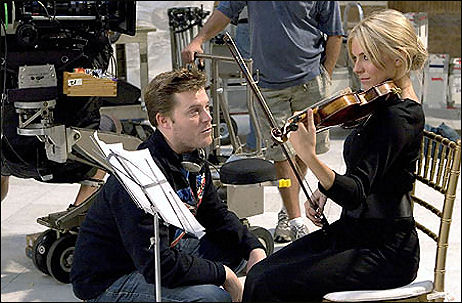 Rawson Thurber, Sienna Miller during shooting of The Mysteries of Pittsburgh