This Terrence Rafferty piece about Robert Altman‘s The Long Goodbye appeared in last Sunday’s N.Y. Times, but the film won’t be playing at Manhattan’s Film Forum until tomorrow so it’s still okay to discuss it. This casually-paced detective film, released in 1974, re-imagines Raymond Chandler‘s Phillip Marlowe as an old-fashioned man of honor with a zen slacker attitude. The intrepid but low-key Elliot Gould got under the skin of this loose-shoe’d shamus and gave the second-best performance of his life (after “Trapper John” in Altman’s M.A.S.H.). 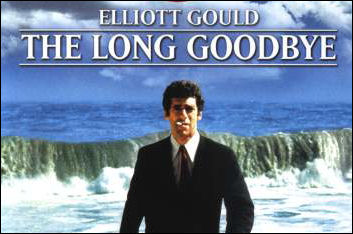 The Long Goodbye‘s most noteworthy signature, I’ve always felt, is how Vilmos Zsigmond‘s widescreen camera is always slowly tracking in a very gentle arc to the right or left. I always saw this as a metaphor for the constant mobility and lack of roots that goes with life in Los Angeles, where the film takes place. I shared this view two or three years ago with Vilmos Zsigmond, the film’s illustrious cinema- tographer, during a q & a at the Newport Beach Film Festival. He agreed with the thought, he said, but remarked that Altman never discussed the “meaning” of the constant camera movement. He just said, “Just keep it moving.” That’s an artist for you — go with the instinct and leave the dissertations to others.

My two favorite dialogue portions: (a) Mark Rydell, playing a slick gangster, mentions to Gould that he was always afraid of getting undressed in the locker room at the end of gym class because he “never had any pubic hair until I was 15 years old,” and Gould deadpans “Oh, yeah? You musta looked like one of the Three Little Pigs”; and (b) a small-town Mexican official, speaking English with a very thick accent, refers to Gould’s friend, a morally sleazy guy named Terry Lennox (Jim Bourton) who may have committed suicide, as “the deceased,” and Gould immediately says, “The diseased…yeah, right.”

The Long Goodbye is purchasable on DVD for eleven or twelve bucks.