When Jim Carrey and Jeff Daniels costarred in the Farrelly Brothers’ Dumb and Dumber (’94) they were roughly 32 and 39 years old, respectively. Obviously not spring chickens but relatively buoyant, fresh-faced, elastic of bod. Now they’re costarring in the Farrelly’s Dumb and Dumber To, which I suspect will be funny and inventive (I was a fan of the Farrelly’s Three Stooges flick), but now we’re talking about a 51 year-old and a 58 year-old playing the same characters. Dumbasses in their 30s vs. dumbasses in their 50s are different equations. You’re supposed to mellow down and gather a little wisdom out as you get older. You can fall into dumb-shit situations when you’re youngish but guys with creases on their faces are supposed to be craftier and less susceptible. 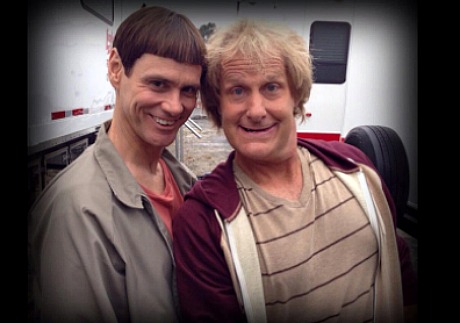 The youngish Abbott and Costello were funnier in their early ’40s films than in their ’50s TV series; Laurel and Hardy were also better in their 1920s two-reelers and their early to mid ’30s features than in their older-guy films of the ’40s (The Dancing Masters, Nothing but Trouble, The Bullfighters, Utopia). Little known fact: Bud Abbott, born in 1895, was around 45 when he and Costello made Buck Privates (’41), in which they played relatively spry draft-age guys.

September 25, 2013by Jeffrey Wells26 Comments
« Previous post
Each Dawn I Die
Next post »
“But She Did Not Show”