When shooting on Zodiac finally ended, director David Fincher “found himself sifting through the digital equivalent of 1.3 million feet of film, enough footage to fill two features,” writes EW‘s Benjamin Svetkey in the current issue. “After months of slicing and dicing, he emerged from the editing room with a cut of Zodiac that ran a tick over three hours. 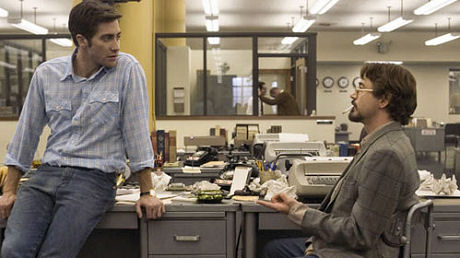 “Even he knew it was too long, so the movie’s original fall 2006 release was pushed to January, then to March, to give Fincher time to make more trims.”

Why are we stuck with outmoded, old-hat concepts of releasing movies, concepts that are out of synch with the various-choice options available through DVD? Fincher shouldn’t have been pressured to trim Zodiac down to 160-plus minutes because it wasn’t necessary. If it had so decided, Paramount could have easily put out the shorter version in general release while simultaneously releasing the three-hour version is select big-city theatres. Why not?

A friend who saw a somewhat longer version of Zodiac (maybe 10 or 12 minutes longer than the version hitting theatres on 3.2) told me a while back that he likes it more. Sometimes longer is just longer, but I have a feeling that people like myself may possibly enjoy the 180-minute version even more when it hits DVD.

“‘We had to lose a lot of connective tissue and a lot of little character moments,’ Fincher says with a sigh. Among the victims: Robert Downey Jr., as a boozy San Francisco reporter, lost three scenes, including “a great one of him sleeping in his car,” according to Fincher.”