Alleged conman Simon Monjack, who’s come to be widely despised in the wake of the recent death of his late wife, Brittany Murphy, has spoken to the Daily Mail‘s Paul Bracchi in a 12.26 article, which has been echoed/reflected in a 12.26 Daily News piece by Soraya Roberts. 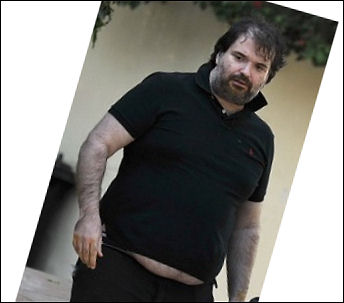 Both articles use George Hickenlooper‘s HE-posted opinion about Monjack (which appeared on 12.20) as a prosecutorial centerpiece.

People everywhere have been guessing/presuming that Murphy’s death was somehow Monjack’s fault. The thinking as I understand it is that no good can come of a marriage to an overweight scumbag with thinning hair and beard stubble, and that somehow Monjack’s allegedly skanky ways (nefarious wheeler-dealing, stealing from Peter to pay Paul, etc.) poisoned Murphy’s body or soul, and that in some curious roundabout way this contributed to her having a heart attack in the shower and dying soon after.

“My problem is that I do not look like Ashton Kutcher,” Monjack told Bracchi.

And he’s right. If you look like an undisciplined fatass people are going to presume the worst if — a big “if” — you hook up with a slender young actress. People are going to say, “Look at that bloated fat-ass…what’s his story? Why in God’s name would a famous actress hook up with a guy like that? Look at him! What is he, some compulsive cheez-whiz eater looking to advance his prospects by marrying her?”

Hollywood types also “don’t like the fact that [Brittany] married someone who was not famous,” Monjack added. “Here, stars like stars to marry other stars.”

There are reasons to consider that Monjack is some kind of scumbag apart from the fact that he looks like one. The lesson is that if Monjack did look like Kutcher, he’d be a lot better off reputation-wise. People see sloth and they assume the worst.