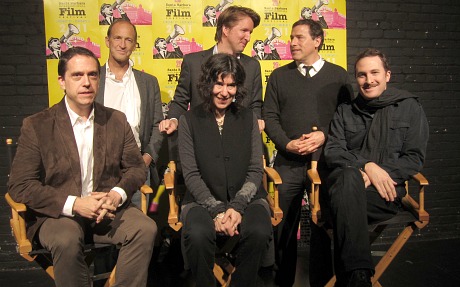 Aronofsky took the prize, if you ask me. Funny, fast on his feet, honest, straight dealer. Hooper and Russell tied for second place. Unkrich, Granik and Ferguson tied for third.

Bart’s two best lines: (a) “Last year we had [the formerly involved] Kathryn Bigelow and Jim Cameron. Have any of you ever hooked up with another director?,” and (b) “He who defers rarely sees.”

I was jerked awake when Russell used the term “movie gods,” although he didn’t mean it in an HE way. He was referring to the gods who decide which films will be green-lighted and which won’t be. But it was flattering nonetheless to think that the term is catching on to some degree.

Aronofsky #1: “Actors are always in control. At is most intense movie acting is a 30-second burst of emotion and then we call cut. So I never pushed Natalie [Portman] too close to the edge. Working with Mickey Rourke, who doesn’t respect directors or scripts or other facets of the filmmaking process, definitely changed the way I work.”

Aronofsky #2: “An elderly important Italian dignitary came into the theatre before Black Swan was about to screen at the Venice Film Festival, and he got a long standing ovation. And at the end of it I leaned over and said to him, ‘I’m really, really sorry for what’s about to happen.”

Aronofsky #3: ” I could play Russell or Hooper. We could all say each other’s lines. But on February 28th, we’re all going to get back to work.”