The Three Days of the Condor Bluray arrives Monday morning, two or three hours before I leave for Kennedy airport. Just barely time to pop it in and watch most of it. It’s probably not going to be visually stunning, but it’ll certainly look “better” than anything that’s come before. I love David Rayfiel‘s dialogue, and I’m telling myself, however illogically, that the sharper visuals will somehow make it sound a tad better. The speakers are Robert Redford, Faye Dunaway, Max Von Sydow, Cliff Robertson and John Houseman. 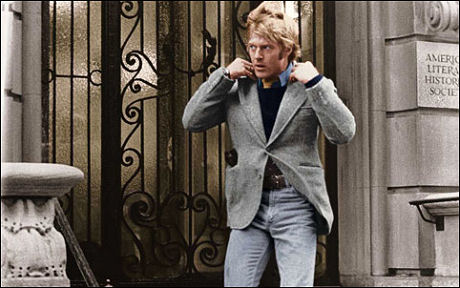 Kathy: You…you have a lot of very fine qualities.

Joe Turner: But you’re overdue in Vermont. Is he a tough guy?

Joe Turner: What will he do?

Joe Turner: Boy. That is tough.

Higgins: Do you miss that kind of action, sir? [referring to joining and working for the CIA during World War II]

Mr. Wabash: No, I miss that kind of clarity.