Ed Zwick‘s Love and Other Drugs (20th Century Fox, 11.24), which I saw earlier this evening, is first and foremost a hit. It’s charming and affecting and likable in a “good Eloi” sort of way, or in the way that cultivated mainstream audiences tend to go for. It’s sharp and polished and beautifully shot and acted and cut, and just grooves right along with sass and wit and generous nudity and undercurrents that are Jerry Maguire-ish at times.

I’m not claiming that the overall tone matches the James L. Brooksian brand in the classic ’80s sense, but it certainly flirts with this and does in fact reach that pinnacle from time to time. For my money Love and Other Drugs is Zwick’s finest film yet — hell, it is his best. But how ironic that he’s hit the jackpot by putting aside his passion for heavy historical dramas.

It’s a very tight and assured romantic dramedy (or “emotional comedy,” as post-screening moderator Elvis Mitchell put it tonight) that delivers an intensely sexual, emotional hair-trigger relationship story about two avoider-dodgers (played with wonderful verve and assurance by Jake Gyllenhaal and Anne Hathaway, both delivering the most appealing performances of their careers).

I’d been told that Hathaway’s performance is the killer, and it is, I suppose, because you can read every emotional tick and tremor on her face, and because your heart goes out to any character coping with a debilitating disease (stage-one Parkinson’s) and who wants to keep herself aloof and in control. But Gyllenhaal gives his most winning performance ever — not the deepest or darkest or saddest, perhaps, but 100% likable with no audience-alienation issues except for emotional avoidance. They’re quite a pair, these two. All you want is to see them keep it together and somehow make it work. 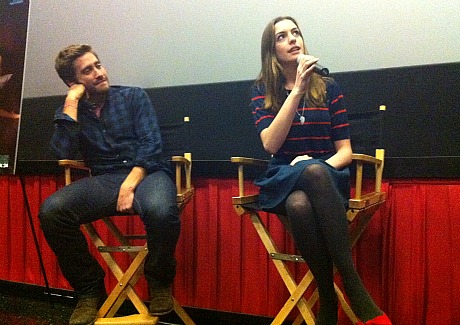 Love and Other Drugs costars Jake Gyllenhaal and Anne Hathaway following tonight’s screening at the Regal E-Walk on 42nd Street.

LAOD is set in mid ’90s Pittsburgh and partly based on James Reidy‘s “Hard Sell: Evolution of a Viagra Salesman,” and has been co-written by Zwick and Marshall Herskovitz and Charles Randolph.

It’s about Jamie Randall (Gyllenhaal), a Phizer salesman on the make, and how he falls in with Maggie Murdock (Hathaway), an emotionally brittle and guarded (and yet openly sexual when so inclined) woman coping with the Big P, and how things brighten and then deepen for them and then get gnarly and strained and then fall apart, and…that’s all I’ll say. It’s set against the mid ’90s Viagra boom, which is introduced about 40 minutes into the narrative. Jamie has been selling Zoloft for Phizer with middling results, but when Viagra comes along it’s champagne-fizz time.

Oliver Platt plays Gyllenhaal’s mentor, and I wish he had more screen time because you can sense potential…but he isn’t quite allowed to bring anything home. Hank Azaria has a lightly layered, medium-sized role as a randy physician, and Judy Greer has a small part as Azaria’s sweet-tempered receptionist. George Segal and Jill Clayburgh play Gyllenhaal’s parents in one early scene and that’s all.

Josh Gad is Gyllenhaal’s Jonah Hill-ish younger brother — a boorish man-child fatso who reps the film’s only serious mistake. Gad is in another film entirely. His presence eventually got so bad that he turned me off just by being. He didn’t have to say a word.

Love and Other Drugs isn’t a deep-well soul film, but it plays its own game in a sharp and likable way, and sometimes quite movingly.

Or…whatever, it won’t qualify in that regard and will just please audiences and capture the admiration of most critics (apart from the Eric Kohn-Guy Lodge nitpick crowd) and make money hand over fist. And that’ll be enough. It’s not Alexander the Great. It just works, is all. LOAD has charm and pizazz and, okay, sometimes strained humor, and yet it never slows down or goes off the rails, or at least not to any worrisome degree.

So forget all that Bill McCuddy crap (passed along in this column on 9.7) about it being “a light romantic comedy” that is “mediocre” and “facing shaky prospects at the box-office.” The guy I spoke to last February about a Pasadena research screening was much closer to the mark.

And I’m not kidding about it having the potential to wangle its way into Best Picture contention. Unless, that is, certain people get pissy about it. A guy I talked to in the men’s room after the screening was going “eeew, it’s two different movies…eeew, it doesn’t blend…eeew, it veers too sharply between broad comedy and disease-anguish and hot sexuality and heartfelt love and heavy emotionalism.” So you can be Eric Kohn and go “no, no…I want something else! This doesn’t fit into my comfort-blanket idea of how movies like this are supposed to work.” And that’s fine, Eric. Go to town and send me a postcard,

LAOD isn’t any one thing, and that’s the fascination of it. It’s not dark enough to be The Apartment, it’s not easy and it’s not “farce” and it’s not just hah-hah funny, and it’s not dramedy as much as comedy with a thorny and guarded edge. The tone is farcical one minute, dry and glib the next, and then it devolves into Josh Gad-Jonah Hill-level humor, but thankfully not too often or for too long. And then it turns melancholy. 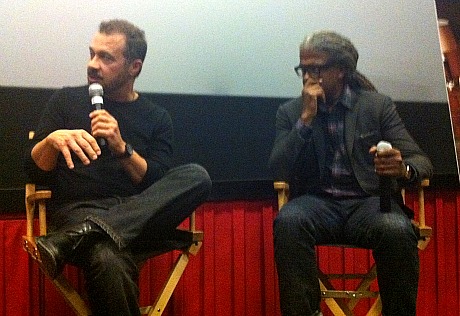 Hathaway is so intense and hard-cased that she ups the movie’s overall game. We can spot her theme from the get-go. She doesn’t want a real love affair with anyone because she knows it’s not going to last because she’s doomed in the long run. We’re introduced to her as someone dealing with stage-one symptoms like intermittent jitters and losing the physical ability to use scissors and her taking drugs to control this, but her condition is never over-dramatized.

The film spends some time on the Parkinson’s effects. Maggie and Jamie go to a big drug fair in Chicago, and she discovers an alternative convention across the street focusing on organic Parkinson’s remedies, and goes over to this event. We see some real Parkinson’s people talking up their personal stuff the way the unemployed talked for Up In The Air, only on a stage with a mike. There are two or three scenes in which Maggie is shown taking senior citizens across the border to get cheaper drugs in Canada.

The core of the romance is Jake’s overcoming his shallow relationship history, and Anne overcoming her emotionally aloof thing. And both Hathaway and Gyllenhaal make their characters come vividly alive. It’s a pleasure to get to know them and share the time. I’m looking forward to catching this at least a couple more times.